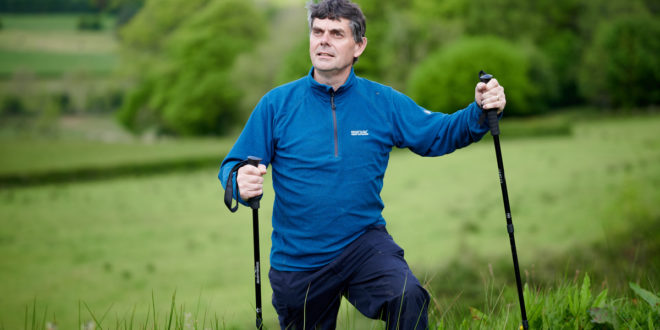 Paraic Conlon of Ardnacrusha, and originally from Tulla, who organised a 12 O' Clock Hills walk raising €32,728 for the Irish Motor Neurone Disease Association. The event was inspired after Paraic’s mother Margaret and sister Maura both died from MND. Photograph by John Kelly.

AN ARNACRUSHA-based charity organiser has revealed he is “overwhelmed” by the huge sum raised from a recent charity walk in memory of his mother and sister who died after contracting Motor Neurone Disease.

However, the Tulla native managed to raise more than treble this figure by collecting €32,728 following a charity walk in the 12 O’Clock Hills in Kilkishen thanks to tremendous support from a large group of family and friends.

“A lot of extra people turned up for the walk and people who did walks later that day gave great donations. It hit a chord with a lot of people. A lot of people in the locality know people who have the disease.

“Two days after the walk, I had collected €16,500 and I still had about 50 sponsorship cards to

collect. The final amount blew my mind, it was so much.
“The Irish Motor Neurone Disease Association (IMNDA) couldn’t believe I had collected so much.
“I was amazed how many who knew of somebody with MND and I think this contributed to the overall fundraising.
“I enjoy going for a drink and the amount that local pubs contributed was phenomenal,” he recalled.

Paraic has helped raise a few thousand Euro for other charities in previous years but on this occasion he and other family members and friends put in a huge effort because the cause was close to his heart.

Motor Neurone Disease is a progressive neurological condition that attacks the motor neurones, or nerves, in the brain and spinal cord. This means messages gradually stop reaching the muscles, which leads to weakness and wasting.

MND can affect how people walk, talk, eat, drink and breathe. However, not all symptoms necessarily happen to everyone and it is unlikely they will all develop at the same time, or in any specific order.

The cause of MND is not known and there is still no cure.

In the Spring of 1990, Paraic’s mother, Margaret (Madge) Conlon from Tulla was diagnosed with Motor Neurone Disease (MND).

Paraic recalled his mother was complaining for about 12 months about different ailments before she started to lose power in her hands and legs.

“When the doctor said Margaret had Motor Neurone Disease and the maximum lifespan is five years that was like a bolt out of the blue. Nobody knew anything about it and there was no Google so information was scarce. There wasn’t as much support available then as there is now.

“It was only the help of neighbours and friends that got us through the diagnosis. It was a difficult time because we were all working away from home, my brother, Eugene was the only one in Tulla and my father had died a few years previously.

“The more sick Margaret got the more disabled she became. She was pretty good up until the end. It is a progressive disease where the message coming from your brain doesn’t get to your muscles.

When your muscles stop working they deteriorate completely.
“Motor Neurone is a slow disease to diagnose, most people have it before it is confirmed because there are so many other conditions that have to be ruled out.

Although The Irish Motor Neurone Disease Association (IMNDA) was in its infancy then, it arranged a visit with a representative, got a wheelchair and very helpful with information and equipment.

His mother was 70 years of age when she died on October 6, 1992 two days after going into hospital.

In July 2018, his sister Maura Reynolds who lived in Roscrea was diagnosed with MND at the age of 65. This came as a major shock to the family as they had no idea that MND was hereditary. Now it is believed to be hereditary in only five to 10% of cases.

The IMNDA were very helpful with Maura with MND nurse calling to see her and providing the mother-of-four with a specialised chair and wheelchair.

Paraic recalled she was treated at home with the help of very good district nurses and in University College Hospital, Galway where the “doctors and nurses were brilliant in the way they treated her and explained things”.
Fourteen months after she was diagnosed, Maura passed away on September 20th 2019.

After Maura’s months’ mind Mass, Paraic suggested they should raise funds for IMNDA. In conjunction with his siblings Eugene, Christopher in Mayo and Bríd in Dublin and Maura’s family

“It is one of the best walks in Clare. When you get up to the top the view is spectacular, you can see to Tipperary, the Shannon Estuary and Galway. There is a compass there with directions to different villages and places. The walk was all organised very well on the day.

Paraic has been involved in organising several charity walks in conjunction with friends that meet regularly in Ger Mulconry’s Pub in Parteen.

Last January, he distributed sponsorship cards to people in numerous locations and set a target to raise €10,000.

The three previous weekends were not a good omen with Storm Ciara, Dennis and Jorge creating havoc. Weather for the weekend of March 7th was projected to be very wet, but it stayed dry for a few hours for the walk.nd

Paraic acknowledged if the walk was cancelled due to bad weather, it may never have been held as Covid-19 restrictions were introduced two weeks later.

When the walk started at 11 am, Paraic was expecting around 120 walkers and was astonished when 230 turned up.

Patsy Neville monitored the car park, Joe Hyde provided an overview of the walk and Noel Gallagher stayed back to make sure nobody was left behind.

When the walkers reached the top, two local musicians – Pat McNamara on accordion and Andrew Murphy on fiddle played a few tunes and finished up with My lovely Rose of Clare sung by Eamon Morrissey and John Prenderville.

This song was very appropriate as it was played at Maura’s funeral as her coffin was being carried from the church.

At the top many photos were taken and the spectacular views were enjoyed by all the walkers. The group decended to the car park where many of the cards were collected. They then returned to Tailrace Bar Parteen where owners Ger and Marie Mulconroy had food and refreshments for all.

The initial count at this stage was €16,500 with many cards still to come in.
Maura’s son, Shane and daughter, Danielle did a lot of fundraising in Roscrea.

Marian Real, nee Culloo who is a first cousin of Paraic’s wife, Carmel, is originally from Tulla and now lives in Patrickswell also raised a lot of money for the charity. Her husband, Peter passed away from MND in August 2019.

The Parteen camogie team invited Paraic to a training session to give a talk on the fundraising, took cards and raised more than €2,000. Great support also came from Paraic’s colleagues on the excutive of Parteen GAA and members of the club.

Paraic has trained a lot of club teams from U-8 to Intermediate level.
At present there are 390 people in Ireland with MND. The IMNDA have four nurses that travel the country meeting up and supporting people living with MND their families and carers.

Paraic said the association makes a real difference helping families to cope with the disease by working closely with local service providers to ensure that MND patients get the care and support they need.

He paid tribute to everybody that supported this fundraising drive through sponsorship cards, donations, Facebook and Gofundme pages and corporate sponsorship.