Home » Sports » O’Connell: Club Camogie Has To Return Before County 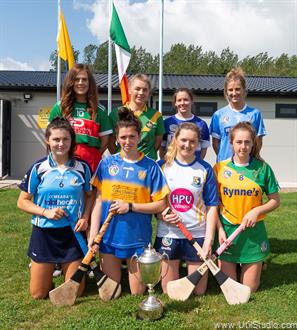 O’Connell: Club Camogie Has To Return Before County

Clare Camogie manager Ger O’Connell feels club action should be prioritised ahead of county games should the opportunity to return to action arise later in the year.

It comes after the Camogie Association announced it was extending its suspension of activity until Monday June 8 following the latest announcement from the Government on the pathway to reopening post COVID-19.

The statement from the Association stated that “we acknowledge that this step will result in further inconvenience and disruption to members as well as the game at all levels, however we appreciate the continued co-operation and support of everyone involved at this time. The health and safety of our members is, as always, of paramount importance and these steps will assist us all in taking the necessary precautions to limit the spread of COVID-19 and to return to full activity as early as possible”.

It also says that the situation will be assessed in line with further advice from Government as the scenario unfolds but Clonlara clubman O’Connell says clubs should be the first ones to be facilitated.

“I believe that would be the right thing to do. 95% of the membership is made up of club players so in my view, if that is the way the Camogie Association went, then there would be a great benefit from it in the long run. The GAA are looking at maybe having club action in August or September so maybe the camogie will go the same way but it really is just all hearsay at the moment. Everyone is just guessing about what may happen down the line” he noted.

He also says while some direction from the top was welcome, the health and safety of all concerned is to the fore of everyone’s thinking.

“It was good to get some bit of clarity on it because it was something the players had been looking for, but the long term future is still uncertain. The main thing for me and for most people is that everyone stays safe. The Camogie Association is no different to any other in that they are just waiting for the advice to come through and I can’t see the Government putting anyone’s health at risk. You just have to trust that they are going to put everyone in the right position and have the right plans in place whenever we are allowed back. As long as it is done right and no one is put in any danger, then that is the main thing for me” he stated.

There may not be any on-field action to get stuck into, but the camogie squad have been keeping busy in recent weeks as they followed their LGFA counterparts in undertaking a 1000km challenge for charity. The Irish Cancer Society, Sláinte an Chlair and Jigsaw were all beneficiaries of the squad’s efforts, and O’Connell says the natural competitive streak within the group meant the initial goal was always going to be surpassed.

“That was great for them to do and they put in huge work for three great charities. We had programmes out to them and they are still training a few days a week. We are monitoring that as much as we can, and the challenge for us is trying to stay communicating with them without overdoing it at the same time. It is all about trying to find that balance. These girls really have that sense that their identity is as a camogie player so when that is taken away from them it can be hard to deal with. Our sports psychologist that we have on board with us this year has held meetings with the girls about the mental health aspect and how they are coping so it is very important to stay on top of things like that. The girls are really competitive without even knowing it at times. We have an app that was keeping track of 1000km challenge and you could see all the rankings about who had clocked up the most. It was really competitive and we were pushing that side of it also to try and beat other groups who had done it and then the push to see who would make the top three of our own crew. I was hanging around down the bottom end of it so it was more the wooden spoon that I was facing for” he laughed.

Ger also praised the collective effort of the squad in providing support for each other along with their charitable work, but feels it was no surprise to see people pulling together in a time of need.

“We have another one coming up in a few months where our coach Conor Dolan is going to do a walk from Galway to Clare for a few charities so that is another to really look forward to. It really is the mark of Irish people all over that when others need help, they are there to really help each other. The girls are really supportive of each other also. We have a few on our squad who are in their Leaving Cert year and the uncertainty at the moment of how that will play out is not nice to be dealing with. We have also seen some of the girls have their routines disrupted with work or whatever it might be so in some small way it might help to have their home training programmes to be working on and gives them a focus” he said.

With no definitive date for a return to action likely to materialise in the coming weeks, O’Connell says everyone has to keep focused on being ready if that call comes.

“The message we are trying to get across to players is to just try and stay on top of things because we just don’t know when we will be back. I felt before things stopped that we were going really well and that we had made progress from the start of the year. All I wanted to see from the outset was to show that we were heading in the right direction and I think that we were. The Waterford game was a bit of a backward step but that was just a disappointing performance from everyone across the board, including us as a management. It stopped that bit of momentum that we had and it is just hard to know where everyone is going to be if and when we do get back on the field” he concluded.