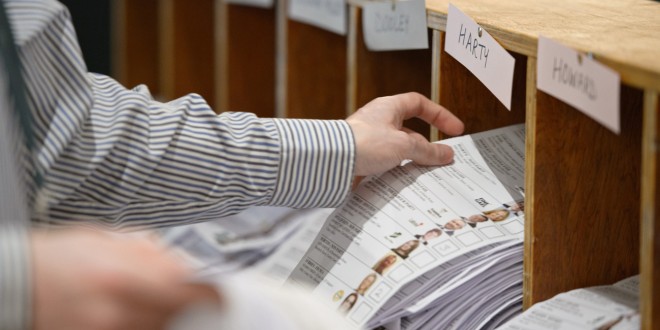 The slot for Dr Michael Harty, Independent fills up. Photograph by John Kelly.

FOUR years on from the last general election, the Clare constituency has almost 10% more voters than it did in 2016.

This time there are 91,120 people registered to vote, up from 82,965 last time. It is a very sharp increase, but besides a growing population, the redrawing of the electoral boundaries with Limerick has seen another 4,488 voters come into the constituency.

The redrawing of the county’s borders helps Fianna Fáil’s Cathal Crowe, the Meelick man now having significantly more people in his local area who can vote for him. The feeling is that he will have enough votes to comfortably take a seat in his first general election.

One of the interesting subplots of the election in is how the presence of three strong candidates from the east of the county (Crowe, his party colleague Michael McNamara and Timmy Dooley) will impact on the outcome.

It is expected that Dooley will also have enough support to win election to the Dáil for a fourth time, while McNamara is also in with a good chance. However, some of those who observe Clare politics particularly closely feel that it is unlikely that three of the county’s four TDs can come from one side of the county.

It certainly would be an unusual geographic situation, but with Mr McNamara sure to draw in a large vote from farmers all over Clare, he will believe he can get over the line.

When the Ennis boxes open, it will be essential for Roisín Garvey that many of the papers there have a number one next to her name.

People from other parties have remarked on the large number of young canvassers who have got behind her campaign in the town, and it is expected that she will at least be close to taking the fourth seat. While it is difficult for the Greens to pick up votes in rural areas, she could make inroads in Shannon, where some of those elected in last year’s local elections felt they would have won a seat had they run a candidate.

It is widely felt that Fine Gael will really struggle to get two candidates over the line again, having had to rely on outstanding vote management four years ago, and with the party currently struggling in opinion polls. If they do, it will be a great achievement for them.

Realistically, all that can be done now is speculate, but it will be very interesting to see how things play out this weekend.

Owen Ryan has been a journalist with the Clare Champion since 2007, having previously worked for a number of other regional titles in Limerick, Galway and Cork.
Previous Mart goers support for McNamara, cool on Greens & FG
Next FG and FF still on top, but not as dominant-analysis