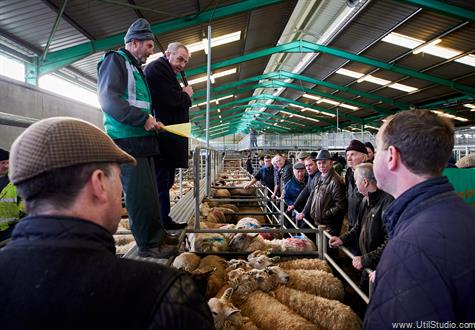 POLITICALLY engaged and numerous throughout the county, the votes of farmers and their families play an important role in every election in Clare.

The last year has seen widespread disillusionment in farming, memorably expressed by the beef protests. Speaking to farmers at Ennis Mart on Tuesday it was clear that the dissatisfaction has not abated and none of those who spoke to The Clare Champion were praising Fine Gael’s record on agriculture.

Many said they will be voting for East Clare farmer Michael McNamara who was a prominent supporter of last year’s protests. Several others made it clear that they wouldn’t countenance giving any preference to the Green Party whose policies they feel are very clearly against farmers’ interests.

One West Clare couple said that farmers are just about able to continue as it is. “People will survive, but that’s all they can do. There’s very little investment in farming other than with grant approval and things like that,” said the male half of the couple.

Both are long time Fianna Fáil supporters who are going to vote for Michael McNamara now. “McNamara is a worker and a worker will get rewarded,” said the husband. “Yeah, I will vote for Mr McNamara as well, he’s the only one that has spoken up about farmers and what they want. Neither Fianna Fáil or Fine Gael seem to give a damn about farmers,” his wife added.

She feels that the response of the agriculture minister to the protests was quite inadequate, and that farmers will punish Fine Gael for it.

Her husband said many farmers are likely to change how they vote now. “I do believe people will change because they want results. And you don’t get results from people who won’t work.”

They expect that if McNamara does get elected, he will be a vocal presence for Clare and farmers in Dáil Éireann.

Another long time Fianna Fáil supporter from Tulla said that this time he will be giving his vote to McNamara. “He’d be number one, because he can talk and he has a bit of understanding about the farming end of it.”

Timmy Dooley is based in his home parish, and he expects he will be returned to the Dáil, albeit with some difficulty. “Timmy could earn it, you know, but he’ll get back. Cathal Crowe will take a certain amount from him.”

Michael Daffy from Clooney feels that farmers didn’t get the support they needed when their protest kicked off. “I don’t think we got any help from anyone, when it came down to the crunch.”

Farming nowadays is very difficult and he said he wouldn’t encourage his sons into it. “There’s too much pressure on farmers today for the money we make out of it, it’s only a hobby really. I’ve two young lads myself and I told them if they stayed at home to go farming I’d sell it!” he says with a laugh.

He feels Clare farmers are likely to remain loyal to the parties they have voted for in the past, while he says the Greens won’t be getting many preferences from them. “They won’t vote for the Green Party anyway, they want to get rid of live exports. See all the young cattle here today, I’d say 50% of them would probably be exported.”

Another man who was attending with his teenage son said that the Greens are far too negative about farming practices to win votes from farmers. “They are against everything in farming. Spraying, everything. You have to do so much for the environment to keep things right, but their policy is to cut the herd and the whole lot. That won’t work. Farmers won’t vote for the Greens but they’ll get plenty of votes inside in the towns and cities, that’s my view.”

He agreed that McNamara will pick up a strong vote from farmers. “He will, because he’s making an effort and he puts a lot of time in. He’ll get elected no bother.”

He criticised Pat Breen for not supporting the protests at Tiermaclane. “He should have made an effort and stood there for an hour with them.”

A Lisdoonvarna farmer said he is turning his back on Fine Gael. “It’ll be Fianna Fáil this time, we’ll see what they do. We voted Fine Gael the last time and we got nothing from them.”

Seamus Shannon from Kilmurry McMahon was canvassing in the car park for Michael McNamara, and he said he only became aware of the Scariff man last year. “During the beef protests he came into very clear focus for the farming group because he stood on the protest line with us at Kepak and he gave free legal advice at a time when a number of us were under pressure, some of us had been injuncted and so on.”

He said he had never had any dealings with the Scariff man until then. “I didn’t know him or the sky over him, I would have seen him in the media as a former Labour TD the same as everyone else.”

Interestingly, he feels there is a swing in the west of the county for the independent candidate, despite him being based in Scariff.

Owen Ryan has been a journalist with the Clare Champion since 2007, having previously worked for a number of other regional titles in Limerick, Galway and Cork.
Previous Champion Sports Chat Podcast Tuesday February 4th 2020
Next Clare electorate up by over 8,000