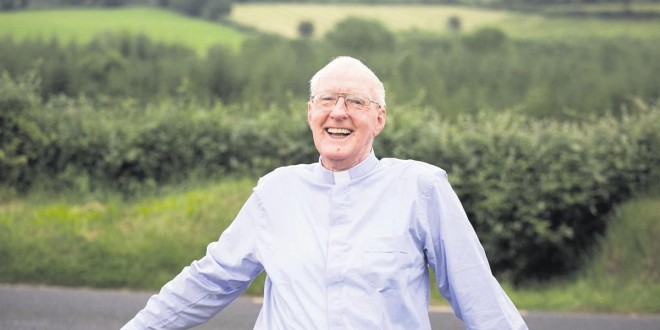 Bush priest on walkabout in Bodyke

He  is known as the Mandiago priest in his adopted home in The Gambia but for the next few months, Fr John (Jackie) Sharpe, CSSP, will be in Bodyke parish. He celebrated the golden jubilee of his ordination over the weekend.

He has already celebrated his 50 years of service in the Shrine Church he built at Kunkujang, The Gambia in March but his official golden jubilee date falls on July 5.

A native of County Tipperary Fr Sharpe’s connection with East Clare goes back to 1965 when he first met Bodyke man, Bishop Michael Moloney, in The Gambia. Having been there since 1937, Bishop Moloney extended him a céad míle fáilte.

Reflecting on his 49 years in Africa, Fr Sharpe sits in his Bodyke living room looking out at the beautiful view, content with what his retirement has to offer.

He came home in 2009 on sabbatical, after spending nearly 45 years in The Gambia without a break. He was sent to Ennis, where he became friendly with Fr Tom Hogan.

Troubled by the words of the Archbishop of Canterbury Rowan Williams, who said the Catholic Church in Ireland had lost its credibility, Fr Sharpe wrote to Fr Hogan.

“I said, I’m available if you are ever short in the diocese. On May 1, 2010 I got a call from Bishop Willie Walsh, which I’m very proud of, as it was a telephone call to the Bush in The Gambia. He said, ‘we’re short of a priest in Bodyke, would you mind coming home for a few months and helping out there’. I said ‘sure, I’m on my way’.”

He spent six months here before returning to The Gambia for the remainder of the year.

In The Gambia, he built a home for himself on the edge of the Bush, or forest in Kunkujang. He keeps in contact with the parish but is no longer involved, as there are enough Gambian priests there to run it.

“When Bishop Moloney went out there were no Gambian priests. He did tremendous work. He was an apostle of The Gambia and was one of the first that ever survived. Before his time, many of the priests that went out there died within a short time. Malaria was the main problem. Malaria tablets began to come in at that time, so he was one of the first Irish men to survive it. The Gambia and Sierra Leone was known as the white man’s grave,” Fr Sharpe recalled.

He first lived in a suburban Bush parish for about nine years and learned the local language, Wolof. One evening, he stumbled upon a settlement and decided to leave the mission to work with them. He hasn’t looked back since.

“I used to go to the Bush a lot to do a bit of hunting. I had a shotgun and one day I was aiming at what I thought was a wild pig and someone said to me ‘Father, Father. Stop. That’s somebody’s pig’. Wherever you find pigs, you know there are animists there. The Gambia is 97% a Muslim country, so when you see pigs, you know there must be pagans nearby. I discovered 34 small little hamlets scattered all over the Bush area. They’d never seen a priest before.

I went to Bishop Moloney and I said, I want to start a mission out there. He said, ‘I’ve no problem with that Jackie but just don’t expect any financial help’, because we had nothing at that time. I was able to get £1,000 together and I went built a little house. Nobody had been to the area before. There were about 10 grass huts and that’s how it all began,” he said.

The people are known as Mandiagos and originally come from Guinea Bissau, which was ruled by the Portugese years before. Following a civil war, many came to The Gambia as refugees and because of their pigs and way of life, they settled far from Muslim life.

He learned the Mandiago language through the children and by using a tape recorder and, eventually, was able to have the mass liturgy translated. Having both languages has worked to Fr Sharpe’s advantage and he had a golden jubilee to remember last March, courtesy of a donation from the president of the country.

Fr Sharpe met him some years back and he was impressed with his command of both languages that he gave him Gambian citizenship and “covered most of the expenses” of his jubilee celebrations.

“Nothing can move me from Gambia now. I have their jokes, culture and traditions. I’m more Mandiago than the Mandiago themselves. They call me the Mandiago priest or, the Bush man,” Fr Sharpe said. He added that he hopes to be buried there and have a traditional Mandiago funeral.

When he first arrived to the Mandiago settlement, they had nothing. No hospital or clinics, just depending on the local Juju shrines, or witch doctors. His trusty medical kit came in handy and he used it to tend to the children’s wounds.

“I would bandage them up and I would give them malaria tablets. I got to know how many children were in the village and that got me into education,” he said.

Before he had come to reside in the village, Fr Sharpe met a Swedish lady called Margareta Edenius, who was instrumental in setting up the school.

“I was still living in the mission before I left to go to the Bush. I had malaria and this tourist knocked at the door. I asked ‘can I help?’ She said, ‘I have £30 left after my holidays and I don’t know what to do with it’. I said ‘I’m your man’. I got out of my sick bed. I had a little Volkswagen and I took her out to the Bush and showed her the situation. That took her straight away and she went to Sweden and got a group of people together. They got £100 together and she sent it on and we built a mud school, under a tree, in the Bush in 1975.”

The children started with an informal education, where they learned English, maths and religion. They also learned agriculture, which was made possible with the assistance of The Little Way Association, founded by West Clare native, Mary Doohan, in England. The students created a garden and saw vegetables growing for the first time. They made wells for water and later expanded into peanuts and cashew nuts.

“The children were very bright. They came out at the top in The Gambia at grade six. After a few years, I got permission from the Government, through the mission, to get recognition for our primary school. We got that and we left the mud school and we built a cement school with money I had raised from different associations, including the Little Way Association and Margareta Edenius,” he said.

They later set up a middle school for primary (seven to nine years) and then developed a high school, with money from Irish Aid.

“To get teachers out to the high school was a very big problem, because they wouldn’t stay in the Bush and most of the educated people would come from Sierra Leone or from Ghana. I used my connections in Ennis and Fr Tom Hogan and John Molloy put on a sponsored cycle and they collected money for a bus.”

Students from the high school got first place in The Gambia in geography in their first year and many have gone on to university. Currently, five have qualified as doctors from The Gambia University.

My best student’s mother was a Juju woman. He is over in London now. He got his BA and went to Liverpool University and did a masters. He did so well in the masters that the university gave him a scholarship to do a doctorate in economics and medical statistics. If you saw the fellow, he is still a proper bush man,” he said.

Fr Sharpe said the education system has helped relations between the Muslims and Mandiagos and he himself has built a relationship with the local Muslim leader or Imam. Every year for the last 30 years, the Imam gives him a piece of the sacrificial Tabaski lamb.

“Education has made relations between Muslims and Christians so good. We make sure that the Catholics in the area get into the schools, but we make sure that there is room for others as well, everyone is welcome. If you want to get in, you have to get past a certain mark and once you have the mark, you can get in,” he said.

The Ennis Apostolic Works branch has also been involved with the mission over the past 30 years, supplying religious objects. Fr Sharpe said he is happy now to hand over to the local Gambian priests and to enjoy his retirement. For now, he will reside in Bodyke before returning to his Bush home in November.