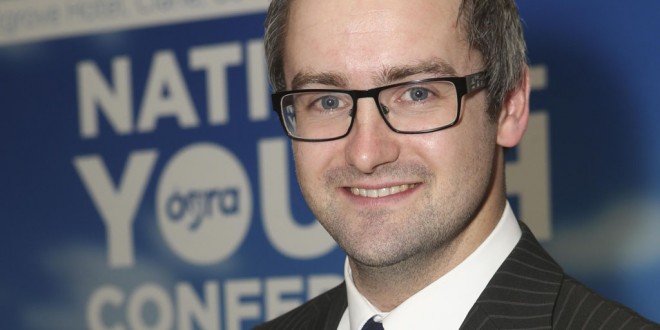 “I was up against Kildare councillor, Naoise Ó Cearúil, a very good friend of mine. The competition was stiff but, at the end of the day, the delegates felt we had different visions for the term ahead. Naoise is a very dedicated, very committed and very capable local councillor in Maynooth, but the fact that I have been involved for 10 years in the organisation, I suppose people went with the man who had more experience,” he said.

The newly-elected Uachtarán has been very involved in policy and organisational issues as a member of Fianna Fáil’s national executive and is looking forward to his term at the helm.

Eoin was the driving force behind developing Fianna Fáil’s policy on Seanad reform and intends to continue to press for meaningful Seanad reform.

“A year on from the people having spoken and saying that they want Seanad reform, we’ve still to see anything of substance from the Government on it,” Eoin said.

He expects to have an extremely busy 12 to 18 months ahead, running the standalone and independent political organisation, attached to Fianna Fáil, and expects that a lot of work lies ahead, just overseeing the five Ógra Fianna Fáil regional structures.

Eoin will be also focusing his energies on Fianna Fáil strategies and structures, particularly those structures that can be focused on elections north and south, on Seanad reform, developing party policies and on the Marriage Equality Referendum, expected next spring.
Eoin is also very keen for Ógra Fianna Fáil to take a leading role in the development of Fianna Fáil policies ahead of the next General Election and believes that environmentally and economically sustainable policies are the way forward for the party and for all sectors of Irish society.

While keeping on top of things in Ógra Fianna Fáil, Eoin also hopes to keep on top of his own full-time job in his family’s civil engineering firm in Ennis.