Home » News » Aoife gets on her bike for Clare Crusaders 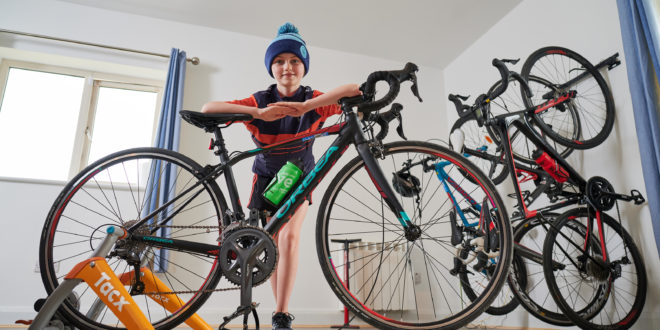 IT’S a long way from Clare to Kildare, and one youngster who certainly knows that is fifth class Ennis National School student Aoife Keane.
Aoife has just completed a mammoth cycling challenge taking in the 165km distance between both counties. Amazingly, she cycled the entire length of the route from her garage at home, raising funds for Clare Crusaders and Barretstown. So far she has raised more than €2,000 for the charities and donations can still be made for the next few weeks.
While others might be exhausted after the endeavour, the 11-year-old revealed that she celebrated her triumphant end to the cycle by jumping on the family’s trampoline.
She laughed, “I hadn’t been allowed on it before the cycle in case I injured myself.”
Aoife moved from Naas with her parents Marie and John and younger brother Eoin to their new home of Ennis last year, with the cycle route taking in the distance between her new and old school.
The idea of the cycle came after she ran over a half-marathon in her back garden and realised she could have used the event as a fundraising event.
“A few weeks ago I ran 26 kilometres in my back garden but never set up a fundraising page. When I realised I couldn’t fundraise after the event, I was really disappointed, but it made me more determined to do something else, something more extreme that would benefit charities at the same time. So, I have decided to cycle 165 kilometres which represents the distance as the crow flies from my old school in Kildare to my new school in Clare.”
Due to COVID-19 restrictions she did the cycle on her turbo trainer in her garage over four days. She recorded herself on video and tracked her progress each day with an onboard cycle computer. This is the longest cycle she has ever done.
Speaking to us after the cycle she said, “It was tough enough, tougher than I expected it to be. I feel relieved I was able to do it, I just had to do it, and I’m really happy that I could.”
She said that she loves her new home in Ennis. “It was difficult saying goodbye to my friends and moving to a new house so far away. My old school, the Mercy Convent, was really nice and I knew I would miss it but I made new friends quickly in my new school. We have been in my new house for half a year and now I love it.”
Explaining why she chose Clare Crusaders, which provides therapy for hundreds of children with special needs in Clare, to benefit from the fundraiser she said, “I didn’t know too much about the different organisations in Clare so I was asking around my friends and Clare Crusaders was very close to many of their hearts.
“They help children who aren’t as lucky as I am and they need lots of support especially during these difficult times. Also, I have two aunties with intellectual disabilities and they are the nicest people you could meet. I understand that Clare Crusaders is an amazing charity and I am prepared to do anything I can to help them.”
She revealed that she had initially aimed to raise €500 and has been thrilled to see so many people support her fundraising efforts. “It’s been fantastic, there is still a few more weeks where people can donate online and I’d like to thank everyone who has supported this.”
Cheering her on along as she pedalled her way to the 165km finish line were her proud family. Mother Marie told us, “Our whole family are extremely proud of her, we never really had any doubt that she would do it. She’s a very determined young lady and she would do anything in her power to do it.
A spokesperson for Clare Crusaders in Barefield said, “We are delighted that she have chosen the Clare Crusaders Children’s Clinic as one of her charities for this donation and of course we are so proud of Aoife.”
The Clare Crusaders Children’s Clinic was established in 2007 and now provides therapy to over 450 children with special needs across the county. It operates entirely through self-generated funds raised by fundraising events and donations with an annual operating budget of approximately €250,000. It is managed and administered on a voluntary basis and receives no government funding. Services are provided free of charge to parents and include Speech and Language Therapy, Physiotherapy, Occupational Therapy and Play Therapy.
If you would like to donate to the fundraising effort check https://give.everydayhero.com/ie/it-s-a-long-way-from-way-from-kildare-to-clare