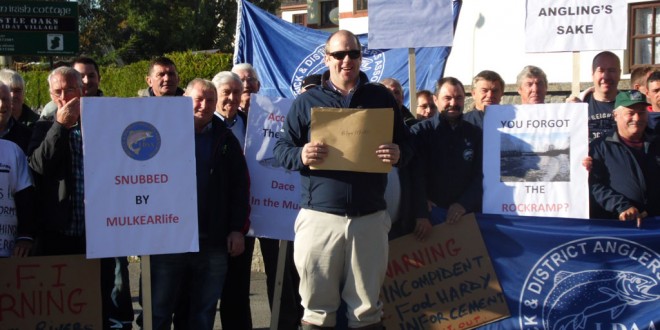 Anglers protest outside the recent EU Melkearlife Conference in Castleconnell

A PROTEST letter, which included claims about the “detrimental effect Inland Fisheries Ireland’s current regime” is having on recreational angling, was delivered to the organisation’s CEO, Ciaran Byrne, before a recent conference.

More than 60 anglers attended the protest, including retired ESB fishery staff and anglers from West Limerick, Kerry and Ennis, before the EU Mulkearlife Conference, at the Castle Oaks House Hotel in Castleconnell.

Two security guards manned the gate of the hotel with a crowd barrier, for what the organisers described as a very civilised protest, organised by the Limerick and District Anglers Association (LDAA). Attendees and speakers from Europe came out to talk to the anglers but IFI management stayed out of sight.

The LDAA claimed it was completely “snubbed” by both MulkearLife and Inland Fisheries Ireland for this conference.

“The association did not even receive a reply or acknowledgement to applications submitted by two of our members to attend, despite being the oldest and largest stakeholder on the system, with well in excess of now 280 adult members. This is not the first time this has happened with fishery events.

“On the other hand, an angler, who resides 67 kilometres or two counties away from the catchment, was invited to speak on behalf of the local angling community, as well as members from the other club in the region receiving invitations to attend,” said LDAA secretary, Eoin Brockett.

He highlighted a case when the IFI handed out an on-the-spot fine to an old-age pensioner of €100 for fishing with the wrong type of hook, while allegedly ignoring illegal netting practices taking place on the Lower Shannon, which is “at epidemic levels”.

Stating the LDAA had no problem with regulations, as long as best practice is being applied with regards management and protection of our fisheries, he claimed the IFI was having a detrimental effect on recreational angling, with anglers in the region being regulated off the riverbank.

“LDAA have made numerous attempts to resolve these issues but to no avail, including a meeting with senior IFI staff, which we excused ourselves at one stage, after being subjected to what we feel were snide remarks.

“LDAA were also given, we feel, misleading information at this same meeting, which is simply pointless, as transparency is key. IFI also recently resorted to giving misleading statements to the press, in efforts to undermine credibility and dismiss grievances brought forward by the association,” he said.

An IFI spokesperson confirmed it has corresponded with the LDAA and is satisfied that it has made every effort to support a positive relationship.

“The IFI has received the LDAA’s decision not to communicate with IFI, but our position as communicated to LDAA still stands,” she said.