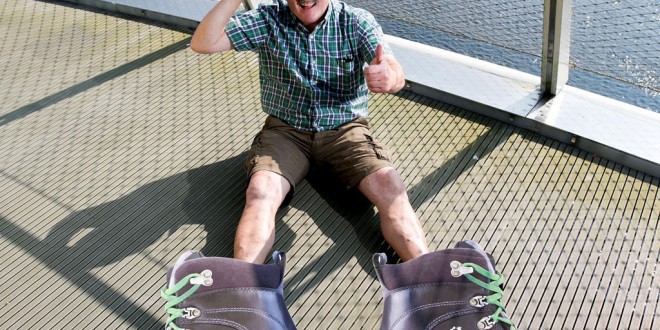 BÓTHAR founder, Peter Ireton was thrilled to present a €22,000 cheque this week to his own charity, the proceeds of a 62km walk from Limerick to Killaloe and back.

The funds that Peter and his fellow walkers raised will be going to fund Bóthar’s fourth African creamery in Rusizi, Rwanda.
The creamery is now at the final stages of completion. Aideen O’Leary, from Cork, is currently on the ground in Rusizi, working with local community groups and getting the creamery ready to open later this year.

Creameries are an important part of providing sustainable futures for the recipient families, who have received an Irish dairy cow through Bóthar.

They become the lifeblood of the local community and start a positive economic cycle of growth and will have a tremendous impact on the lives of the entire community.

“This was the third year the walk has taken place and every year it gets better and better. We start out early and we finish late.
“All in all, it took us about 11 hours but we stop a few times along the way. The time flies and the scenery is so beautiful. It’s a lovely way to spend a day,” Mr Ireton said.

“As an organisation, we get to see just how impoverished people are, how they try make do without the very basics. We also see how easy it is for us to make a difference out there.

“We have seen how an Irish dairy cow, or even a local animal we buy for families with donations we receive, can lift a family from the most abject of poverty to self-sufficiency. A creamery is life-changing for everyone in the community,” he explained.

Bóthar was established in Limerick in 1991, as a one-off gesture of airlifting cows to 20 families in a poverty-stricken region of Uganda, to mark Limerick City’s Treaty 300 celebrations.

Since then, it has grown into one of Ireland’s leading international NGOs.

Over the past 23 years, the organisation has delivered thousands of animals annually to families in 35 countries across Africa, Asia, South America and Eastern Europe.