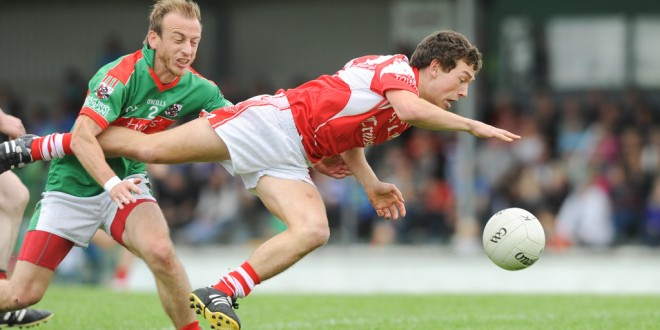 Declan Callinan of Kilmurry Ibrickane in action against David Reidy of Eire Og during their senior championship semi-final at Kilmihil. Photograph by John Kelly.

Champions Cratloe and Éire Óg will contest the final of the Clare senior football championship following their semi-final victories over Cooraclare and Kilmurry-Ibrickane respectively.

Their final clash will be a repeat of the opening round which Cratloe won by three points, 2-12 to 1-12.

Coincidentally, both sides had winning margins of four points at the weekend. On Saturday in Kilmihil, Eire Og were always in control in their clash with Kilmurry-Ibrickane and emerged 0-14 to 1-7 winners, with the West Clare side’s goal coming in injury time.

Kilmurry-Ibrickane finished that game with thirteen men after Shane Hickey and Evan Talty were sent off while, earlier, Odran O’Dwyer picked up a black card which ended his involvement in the game.

The early exchanges of Sunday’s semi-final at Cusack Park was evenly fought but, gradually, Cratloe got the upperhand and emerged with a 0-12 to 0-8 win.

This result keeps the South Clare side’s dream of winning both the senior hurling and football crowns in the same season very much alive. They face Crusheen in the hurling decider on this coming Sunday at GAA headquarters with the majority of the same players making up the starting line up in both sides

Meanwhile, the intermediate football final will go to a replay after Wolfe Tones and Corofin played out a draw at Cusack Park on Sunday. Gary Leahy kicked the equaliser for the Shannon club in injury time to leave the final score at 1-6 for Wolfe Tones to 0-9.

Corofin had lost influential captain Jamie Malone in the closing stages to a black card.

In Sunday’s semi-finals, Naomh Eoin were 0-18 to 2-9 winners over Michael Cusack’s while Coolmeen scored a 2-10 to 1-10 win over Ennistymon.

On the hurling front, St. Josephs Doora-Barefield lost their battle to hold on to senior status when they went down to Whitegate at Dr. Daly Park in Tulla. The East Clare side, winners of the intermediate title in 2013, showed the greater hunger for victory throughout and this proved decisive but the Doora-Barefield men will rue many missed chances when they reflect on this game. The final score was 2-9 to 1-9 in Whitegate’s favour.