Home » Lifestyle » Eric Trump says dad will be US president 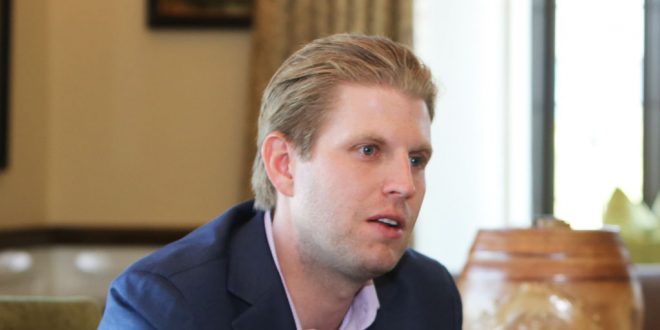 Eric Trump says dad will be US president

DONALD Trump’s son is adamant that his father will maintain a close relationship with Ireland should he become the 45th president of the United States. In an in-depth interview with The Clare Champion at the Trump International Resort in Doonbeg on Sunday, Eric Trump also backed his father’s proposal to build a wall between the US and Mexico, while he supported his controversial stance on temporarily banning Muslims from entering the country.

“I think there will be no better friend to Ireland, not only because he loves this country and he has spent a tremendous amount of time here but I think Ireland has always been one of our true friends and allies in the world, as opposed to so many of the other countries that call us allies but then totally disrespect us in so many ways. What country in the world is closer to the United States than Ireland? I would argue none,” Eric Trump replied, when asked what type of relationship he envisaged between Ireland and the US in the event of Mr Trump defeating Hillary Clinton and winning the election.

“I think he’ll hold those friends very, very close and I think he’ll probably push our enemies away, as they should be pushed away. I think the Western world will benefit significantly from that and the relationship between our countries will benefit. I think we all have the same common goal. Air Force One will be coming into Shannon. There is no question about it,” Eric Trump vowed.

He is certain that Donald Trump will be living at 1600 Pennsylvania Avenue in Washington come January 2017.
“First of all, he’s amazing. Second of all, he’s going to win. I’ve had Americans come up to me today (Sunday) saying, ‘please make sure your father goes all the way.’ He’s self-funding his campaign. He has put in millions and millions of dollars. He hasn’t accepted any money, at this point, from anybody. He has won the Republican nomination so he has beaten 17 of the best and brightest politicians in the US. It’s an amazing story. He’s going to take on Hillary Clinton, who is a political machine in the United States, and I think we’re going to win.

“The polls in the swing states, including Pennsylvania, Ohio, Florida and Virginia, we’re winning them. If you win Ohio and Florida, you have just won the presidency of the United States. Our polls show that right now. He’s trying out for probably the hardest and most arduous job in the world. It’s probably the hardest interview process in the world. You get hit from the left, you get hit from the right, you get hit from special interests and you get hit by media,” he has found.
Eric Trump knows that Donald Trump will be subject to intense scrutiny in the months ahead but feels he will deal with that.

“Is he going to get hit? Yes. Are you going to get hit from every angle and every direction? Yes. But hey, that’s just the nature of the beast, running for the biggest job in the world. I’ve been very, very close to him and by his side throughout this whole process and probably have done more TV than anybody. There is not a day that goes by that I’m not on TV representing him and the family. By the way, not as a politician. I have no interest in going into politics but more as a great character reference. The man is just doing great. The two of us have built hotels and golf courses around the world together for the last 11 years. He jumps into this thing and he’s in the drivers seat. As of last Tuesday, he has more votes than any Republican nominee ever. Think about that. He has more votes today than George Bush had when he won the thing. We still have 13 states left to go. He has certain states that you have three or four times the amount of people turning out to vote than ever before in any primary. Then you look at Hillary’s side and no one is showing up to the polls. They are 30% down over the last time there was a presidential primary. It’s unbelievable what the man has done as a non-politician,” Eric Trump maintained.

His father has enraged numerous people during his bid for the Republican nomination, including Mexicans and Muslims, whom he has suggested should be temporarily banned from entering the US.

“I think the very reason he’s in this race is, quite frankly, his own frustration. I think that’s pretty endemic in the general population in the United States and around the world. This isn’t just something that is exclusive to America. You have it as well in Ireland. How many more politicians can you have that get in front of a mirror and rehearse the same soundbites over and over and over?

“He speaks from the heart. How many times have you seen a politician come out with three tele-prompters and they are in front of four people. They give the same speech 400 times. He doesn’t do that. He gets out in front of crowds of 20,000 to 30,000 people and he speaks for an hour off the cuff. He doesn’t tiptoe around issues.”

Eric Trump believes his father’s suggestion that a wall should divide the US from Mexico is a great idea.

“Everybody talks about illegal immigration, which is a massive problem in the US, as it is in Europe. No one is willing to talk about it but he says, ‘hey, we’ve got to build a wall. We need a Southern border.’ I do (believe in building a wall) and here’s the reason. In America, we have a massive problem. We’ve got a Southern border in the United States that is massively porous. We’ve got tens of thousands of people crossing that border every day, carrying bad things, including heroin, cocaine and a lot of other really bad drugs. It’s getting into the country. It’s being distributed in every state and in every block of the country. It’s causing massive harm to our youth, education and to family structure,” he claimed.

“At the same time, you also have terrorism and there is no bigger target in the world than America. We’ve seen what has happened in Paris, Brussels and other places. All of our western societies are being attacked by really, really bad people. You’ve got a host problem and my father is just a big proponent of ‘hey, let’s know who is coming into our country.’ My mom is an emigrant. I’m the product of an emigrant and I’m certainly sympathetic to this but she came in legally. His big thing is that anybody who comes into our country, needs to come into our country legally. We’re a country of immigration and we always will be but people have to come in legally. I think that message, probably more so than any other thing that he has talked about in the United States, has really resonated. I think it’s probably relatable over in Europe as well because you see what’s happening in Germany, Paris and Brussels. You’re never going to get it 100% but you can probably take care of a lot of those problems, if you know who is actually coming in,” Eric Trump claimed.

He also supported his father’s divisive suggestion that Muslims should be banned for a period from entering the US.

“I think that’s what makes him really unique, he’s willing to say what’s on his mind. What other politician would ever come out and be direct? Remember that was at a time when President Obama was thinking about taking in 200,000 Syrian refugees. The director of the FBI and the director of the CIA in the United States were both jumping up and down, saying, ‘we know from our intelligence sources that there are members of Al Qaeda and members of ISIS posing as refugees.’

“Some of the best intelligence people in the world are telling us, categorically, that within that group of 200,000 refugees, there is a percentage of people posing as refugees, trying to get access to the United States. Despite that, they still wanted them in. If one of those people kills one person in the United States, it’s not worth it. I think that’s why my father was pretty outspoken about it. His message was ‘let’s pump the brakes, until we can figure out what’s going on’

“What he means is what’s going on with ISIS and us not being able to solve that problem. We need to get rid of that problem forever and he’ll do a great job with that. It’s affecting you guys as much as it’s affecting us. We also need to know who these people are and that’s his message.”

Eric Trump is adamant, however, that the family is definitively not anti-Muslim.

“It’s very easy to say he’s anti-Muslim and that’s not the case. I’m doing projects all over Indonesia and in Dubai. We’re opening two golf courses in Dubai in the next year. This issue has to do with radical terror and people shooting up our streets and shooting the streets of Paris and Brussels. It’s very easy to say somebody is anti-Muslim but the real message is ‘we’ve got to know who is coming into our country’. We’ve got to get great people coming in, people who want to contribute to society, work hard, raise families and speak the language.

“So much of what you’re seeing right now with the vote in the UK, dealing with the European Union, is quite frankly the same issue. It doesn’t seem like it’s an issue just for the United States,” the son of the US presidential candidate observed.