Home » Arts & Culture » Zoe on top of the world 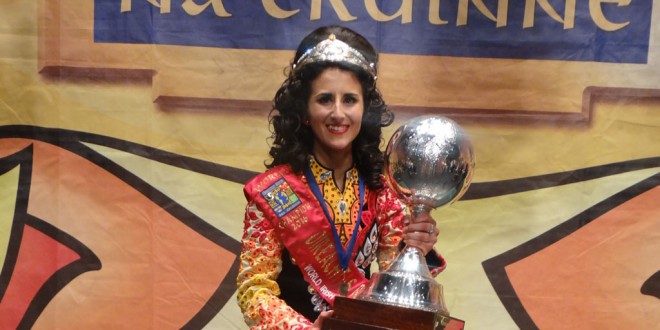 Zoe on top of the world

A Clarecastle woman has danced her way to the top of the world. Zoe Griffin has been named senior ladies champion at the World Irish Dancing Championships in Glasgow.

“I’m delighted, this is always something that I wanted to do and I couldn’t believe it when it happened. When I went to the competition I was aiming for top five but to win, I’m just delighted,” the 21-year-old told The Clare Champion.

She explains, “My sister was a dancer so I just went with her. She was eight and I was only a baby then, I suppose I was born into it.”
Zoe was among the 14 solo qualifiers and a céilí team from Scoil Uí Ruairc to compete in Glasgow. Collectively, the dance school have brought home a world championship, two world medals and 14 recall medals.

As well as her fellow dancers, Zoe was joined in Glasgow by her family including her proud parents. “It was a real special moment,” she recalls.

Zoe pays tribute to all her dance teachers and her family for their support over the years, singling out her mother in particular.

“Mam and dad have done so much for me. Now that I started driving this year it’s taken the pressure off but there were times when my mam would be on the road four or five nights a week bringing me places. She is my number one supporter,” she says.

A celebration was held in Powers in Clarecastle with the Tulla Pipe Band welcoming Zoe home after the competition. However it was soon back to the dancefloor. “We came back on the Monday and I started back on Tuesday. We have the Irish nationals in May in Dublin and the American nationals in July in Orlando so there is plenty to do. It’s a bit of pressure but pressure drives me on,” she says.

She does, however, expect that there will be plenty of celebrating in the dance school when things quieten down at the end of the summer.

Dance is very much part of Zoe’s life. She is currently in her third year of studying Irish music and dance at the University of Limerick. Once she graduates she hopes to become a qualified dance teacher and also to possibly get involved in personal training.

While she is currently focused on preparing for the Irish and American nationals, she admits that she is looking forward to defending her world title next year. Fittingly, next year’s world competition will be held in Dublin.

“I will hopefully go to Dublin next year and retain my title. This year I had already won the Munster, All-Ireland, Great Britain and the Irish nationals so I had a bit of a reputation going over to Glasgow, people knew who I was. With the competition being in Dublin, hopefully that will give me a bit of home advantage. It would be really nice to win in Dublin,” she concludes.