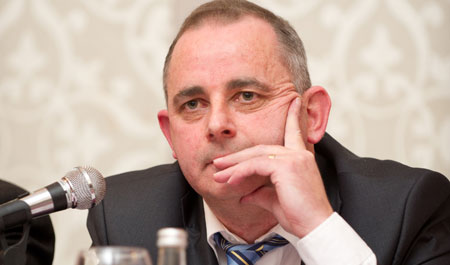 County Board treasurer Bernard Keane has conceded that the board's finances are "serious".

Treasurer of the Clare GAA County Board, Bernard Keane has admitted that the board’s finance are “serious” prompting them to acquire “a line of credit of €200,000″.

The financial scenario was outlined to delegates attending this week’s meeting of Clare GAA and the meeting unanimously supported a request from the executive to sanction the borrowings.

Treasurer Bernard Keane said, “This is a necessity. There is no income until July. The finances are very serious at the moment”.

Secretary Pat Fitzgerald explained that the board hoped that the borrowings will be paid back before October.

“All outgoings are between January and April and monies don’t start to flow until July. We have acquired similar resolutions from Croke Park and from Munster Council,” he added.

Outlining the expenditure to date on county teams, the board treasurer said this amounted to €153,244.27. However, he cautioned that it will be higher as “there are a lot of bills to come in yet”.

“In addition, €18,645.10 has been spent on Cusack Park and Caherlohan and that’s nothing to do with the projects at those venues. It’s important that we all work together to stay on top of this,” he emphasised.

He told delegates that the recent race night for Clare football in Doonbeg realised a profit of €9,000.

Pointing out that the success of the hurlers in reaching the league semi-final is a big help, as it will mean a good financial return, Miltown’s Noel Walsh observed that the progress of the footballers in winning promotion to Division 2 and in getting to the Division 3 final will also help.

The treasurer replied, “The return from the league final will just about cover the costs, while there will be a lot more travelling involved next year”.

Previous Champions still unbeaten
Next Zoe on top of the world