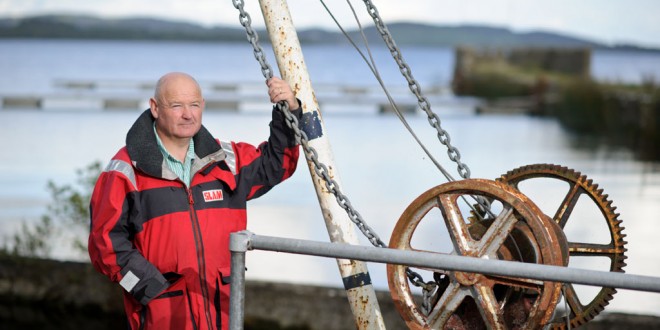 WILLIAMSTOWN Harbour in Whitegate has been sold for a figure believed to be just shy of €1 million and the new owners have plans to develop the location, to return it to its former glory.

Shannon Sailing Marina is a company set up 28 years ago in Dromineer, County Tipperary, directly across from Williamstown on Lough Derg. It is expected that the expansion to County Clare will see jobs created locally at the new site, as well as spin-off jobs during a planned construction phase.

The sailing company’s base at Dromineer consists of a fully serviced workshop where the company carries out complete overhauls on boats. It includes a chandlery shop, where it sells boating equipment, and it also operates an ISA training school, where they teach people how to drive motor cruisers, drive power boats, sail boats, how to navigate, how to use VHF radios and first aid.

Speaking to The Clare Champion following the purchase this past week, Mr Dillon said his business is “basically a one-stop shop for all the boaters on Lough Derg” and this move will see these services expanding to the Clare side of the lake.

“We always wanted to get over to the Clare side and Williamstown, because of its historical value and its position on the lake, is perfect for us. I can look out the window here in Williamstown and I can see our other harbour. We’re literally five minutes by boat across from one to the other so it makes a lot of sense. Basically, we now have a base on each side of the lake. So we are looking after our market because some of our customers were from the Clare side so we can work with them over on this side,” he said.

Mr Dillon said he hopes to advertise one job for a caretaker in the coming week and says, in the short to medium term, construction works are planned.

“We are going to overhaul the whole project here. We are really debating what we are going to do with it right now but, basically, we will look after the customers we have and extend the range of services we have. In 1835, the Dublin Steam Packet company had a steamer base here in Williamstown and had a very historical jetty and pier. In the short to medium term, we are going to try to develop the marina here on the old steamer theme, as we are conscious of the history and we want to keep that up,” he said.

The company has also purchased the site of the old Williamstown Lodge hotel, which has particular historical significance, and Mr Dillon said plans have been mooted to restore something on this site.

“When the steam packing company built the harbour here, they also built a hotel called Williamstown Lodge and the Black and Tans arrested four guys in it during The Troubles and took them down by steamer to Killaloe, where they were arrested, interrogated, tortured and shot on the bridge.

“These were known as the Scariff Martyrs. The IRA volunteers came in and burnt the hotel down the following night, but the stable block of the hotel is now two apartments. Our long-term plan is we’d love to restore a building on it befitting that era. That might never happen but it is in the thought process at the moment,” he outlined.

Mr Dillon also said it is planned to develop a shop and coffee shop in Williamstown Harbour, which would not only serve the boaters but also locals as well.

“At the moment, it is just a basic marina here, with no shop and so our berth-holders here will fully avail of our workshop facilities and our diesel facilities.

“We are going to do some indoor storage, which is not here at the moment and, in time, then we’ll do the shop and a coffee shop,” he said.

Mr Dillon also expects tourism on the lake to increase, and they hope to link in with tourism bodies to see if Williamstown could be included as a stop on the East Clare Way but, he said, it is early days yet.

“We think that tourism on the lake is going to pick up and we have a hire fleet here, as well as the Shannon Castleline and, although we are at the infant stages, we will probably reopen the hire fleet in the spring but that’s not a definite yet,” he concluded.

Carol Byrne is a reporter at The Clare Champion newspaper reporting on news in the East Clare area and the arts. She also covers the courts in County Clare and has received seven national awards for this coverage from the Law Society of Ireland and a National Lottery Local Ireland national media award for Best Community Story 2019. A Masters in Journalism graduate of NUI Galway, she also holds a Bachelor of Arts from the University of Limerick in Music and Media Studies, and a Higher Diploma in Irish Legal Studies. She began her career interning at The Limerick Leader and Clare FM, before taking up a full time post at The Clare Champion in 2006.
@@Carlsburn
Previous Rita is one in a million at Cliffs Visitor Centre
Next Major research investment at UL