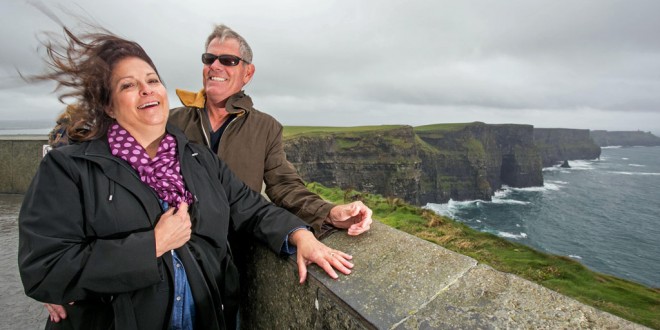 Rita Shaw and her husband, Stephen at the Cliffs of Moher. Photograph by Arthur Ellis.

Rita is one in a million at Cliffs Visitor Centre

The one millionth visitor to the Cliffs of Moher Visitor Experience in 2014 was recorded on Monday, October 20.

Rita Shaw from Niceville, Florida, USA, became the one millionth visitor when she arrived at the Cliffs at 11am. Rita, who is on holiday in Ireland with her husband Stephen, was greeted onsite with music and a champagne reception before being presented with a certificate marking the occasion, as well as a €5,000 prize return holiday to County Clare.

2014 marks the fourth successive year of increased visitor numbers to the Cliffs of Moher Visitor Experience, with figures for the year so far up 12% on 2013.

The Clare County Council owned visitor centre has also seen substantial investment in product and facilities in 2014, with a spend of over €600,000 on additional coach parking facilities, new exhibition content, restoration works in O’Brien’s Tower and a redesign of the foyer at the visitor centre.

Councillor John Crowe, Cathaoirleach of Clare County Council, was amongst the first to congratulate Rita on being the millionth visitor. He also praised the Cliffs of Moher for playing “a leading role in the Irish tourism sector’s recovery during recent years”.

“It is a tremendous asset for the west coast of Ireland to have a tourist attraction of the calibre of the Cliffs and the only attraction in the country outside of the Dublin area to attract such numbers,” he said.