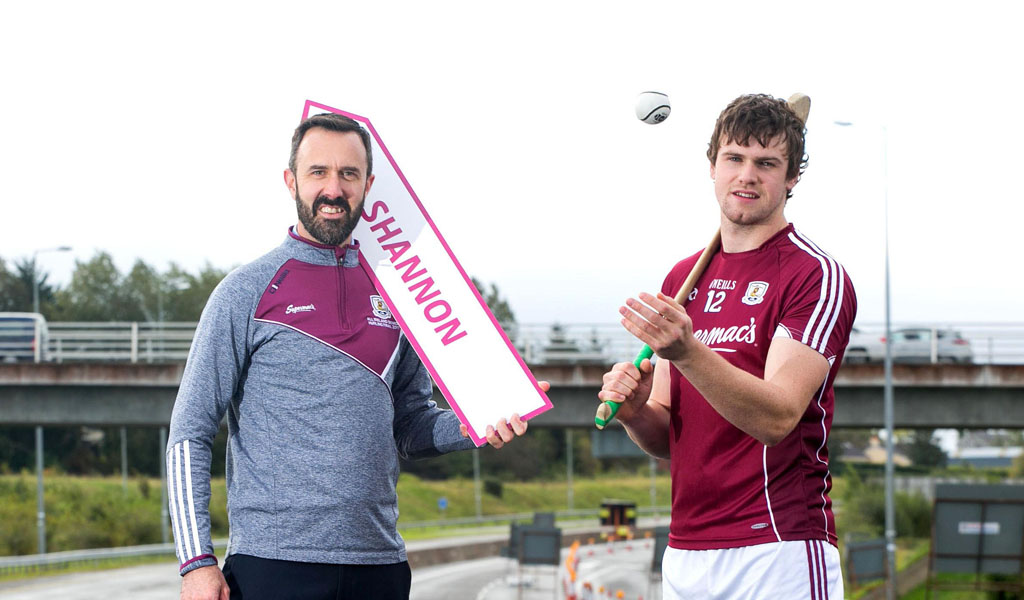 Improved access to Shannon Airport will become one of the major benefits from the opening of the Gort-Tuam motorway. Among those also benefiting will be Galway’s all-conquering hurlers, many of whom will depart Shannon in November for the AIG Fenway Hurling Classic. Photographed with Shannon Airport Managing Director Andrew Murphy (left) on the motorway ahead of its formal opening is Galway hurling star Joseph Cooney. Photograph by Arthur Ellis.

This Wednesday’s opening of the M18 Gort to Tuam motorway has been welcomed by Councillor Tom McNamara, Mayor of Clare.

Mayor McNamara said the motorway is “a vitally important infrastructure project that will bring a range of significant benefits for the regional economy and for communities along the route that are currently experiencing traffic congestion.  It also will create immediate benefits, especially for drivers of commercial and heavy vehicles.”

“There are clear benefits for Shannon Airport which will be easily accessible to customers along the western seaboard while the improved connectivity will make the West of Ireland a more competitive location for foreign direct investment,” he said.

Shannon Group and Shannon Airport have stated that the opening of the M18 Gort to Tuam motorway is “an unprecedented opportunity to advance the case of a western economic corridor”.

Shannon Airport managing director Andrew Murphy said that this final link in a seamless motorway/dual carriageway chain from Tuam to Galway, Ennis, Shannon, and onto Limerick redoubles the potential of the region to be marketed for inward investment and tourism.

Mr Murphy said that all stakeholders along this Atlantic corridor must come together now and look at how they can collectively promote the region for the benefit of all.

“This is much more than the opening of a segment of a motorway; it is huge stimulus for advancing the economy of this region.  Up until now, the absence of continuous motorway right up to Tuam was an impediment in creating the collective that we now have at our disposal,” he said.

Wednesday’s opening of the M18 Gort to Tuam motorway has been welcomed by Councillor Tom McNamara, Mayor of Clare.
Previous Sixmilebridge edge out their neighbours
Next RTÉ’s Nationwide looks at Brendan O’Regan