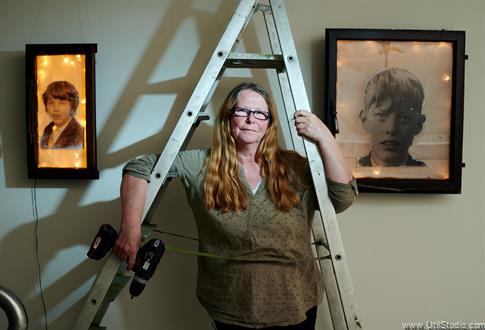 Anne Stewart who is showing an exhibition entitled " Memories Of Displacement In A Divided Community" at Scariff Library from July 4th to August 4th. She is pictured with two pieces, one depicting a young lad William Mc Laughlin, who was killed in the troubles, as well as a young Ian Paisley. Writer Susan Mc Kay will be a guest speaker on August 3rd. Photograph by John Kelly

‘We were told to get out by the UDA at gunpoint’

GROWING up a Catholic in Loyalist- dominated Newtownabbey on the fringes of Belfast in the late 1960s and early 1970s meant an uneasy childhood for Kilkishen- based artist Anne Stewart.

So traumatic was it that after leaving  she didn’t return to the area for over 40 years, until she made a trip back there in 2018, but she has used the difficulties of her early life for inspiration for a new exhibition, Memories of Displacement in a Divided Community, which goes on display at Scariff Library this Thursday.

The majority of the exhibition consists of pictures of the pupils of her alma mater, Stella Maris in Newtownabbey, who lost their lives during the bloody conflict.

“There is one portrait of Bobby Sands from a photograph; the rest are distorted photographs of the students,” she says.

On Tuesday, she was busy closing off sources of natural light at the library, so that viewers will get a real sense of the work when their eyes meet it. “There are lovely skylights that are great for ordinary type paintings but my pieces are like light boxes. In order to get the effect, we had to block off all the skylights and it’s been some job, I can tell you.”

Stella Maris was only open for 29 years, from 1964 to 1993, but yet 27 of those educated in its classrooms were killed during the Troubles, mostly by Loyalist paramilitaries, but some at the hands of Republicans. Another three were teenage members of the IRA, who died while handling explosives in 1972 and its most famous combatant was Bobby Sands, who died on hunger strike.

Photographs of most of the 27 are on a website dedicated to the school’s history, where Anne came across them and she has distorted and adjusted those pictures for the exhibition. “Some of them have holes in them; with some of them it looks like they have bullet holes in them. It depicts the way the students were discriminated against, how their personalities were affected.”

Belfast was becoming increasingly bitter and segregated in the early ’70s, as the Troubles were at their fiercest, and Anne’s family were left in no doubt as to their status in Newtownabbey. “Initially, the housing authority was trying to bring Catholics and Protestants together but they didn’t bring enough Catholics and there wasn’t a 50:50 ratio, it was more like 70:30. I don’t know what it was exactly but there were more Loyalists than Catholics. It was the Loyalist element that had the upper hand on the ordinary Protestant people, our neighbours. I feel they were put under pressure as well, not to be seen to be treating us as normal.”

Like so many others, her family came South to Shannon in 1973, a year in which 253 people were killed in the conflict.

In their case, remaining could have seen family members swelling the ranks of the deceased even further. “We had no choice, we had to come down to Shannon because we were told to get out by the UDA at gunpoint; we had no choice in the matter. The whole family moved down in 1973 to Clare.”

In the 1980s, Anne moved to Kilkishen and has become part of the local community in the decades since, something that wasn’t possible in the dysfunctional part of the world in which she grew up.

After integrating in East Clare, her interest was piqued in its history and customs but while carrying out research, she realised it was time to revisit her own early years.

“I found that the more I was looking into the history of Kilkishen, my mind kept going back to my own childhood in the North and eventually I said ‘I’ll have to do something about this’. That’s when I started researching about the school and I got a shock when I found out that 27 past pupils of the school actually died as a result of the Troubles. It was a very high ratio for such a young school.”

Anne had known one of the 27 personally, young Geraldine McKeown, who was killed by a UVF bullet shortly before Christmas 1976, a particular repulsive murder, even by the standards of the Belfast of the time. “She was watching television and a sniper’s bullet came in through the window and killed her when she was sitting watching TV. She was only 14.”

Bobby Sands attended Stella Maris from 1965 to 1969 and when he died following a 66-day hunger strike in 1981, it was one of the seminal moments of 20th Century Irish history.

“He was backed into a corner and he had to take a stand. He made that stand, which I believe was a very brave road to take. But the intransigence of the British Government, they just didn’t want to move, didn’t want to say they were giving in to terrorists.”

A sort of homecoming

When Anne moved to Clare, she really left Belfast behind, being very glad of the chance to live a far quieter life than would have been possible there.

Indeed, so uncomfortable were memories of her early life that she hadn’t been back there for over 40 years, until 2018, when she returned, long after peace had taken root.

However, even so long later, she was haunted by her memories and deeply uncomfortable. “I went back to do a video of my childhood memories growing up in Belfast. I used to go up Carnmoney Hill, which was right at the back of the house. If I got really stressed, I would go up the hill and connect with nature; that seemed to calm me down. I used to go right up the top of the hill and down the other side. By the time I’d get down the other side, I felt calm enough to go on to do another day. I wanted to do that video up the hill, so myself and my brother drove up.

“We went up to the entrance to the walk; they had made a lovely community walk. But we stupidly drove up in a Southern registered car and we were instantly recognisable then as Catholics. There were bonfires being built and Union Jacks in front of people’s houses and stuff like that. All of the memories came back to both of us, myself and my brother. We were pulling up and Joe said ‘I can’t do it, we have to go’. We couldn’t do it, we just had to leave the area.”

Owen Ryan has been a journalist with the Clare Champion since 2007, having previously worked for a number of other regional titles in Limerick, Galway and Cork.
Previous Making a splash at Clarecastle Regatta
Next Remembering New Quay tragedy 50 years on 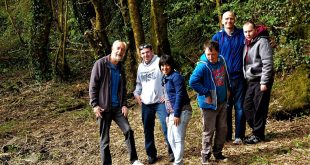 “step into the shoes” of young people with Autism