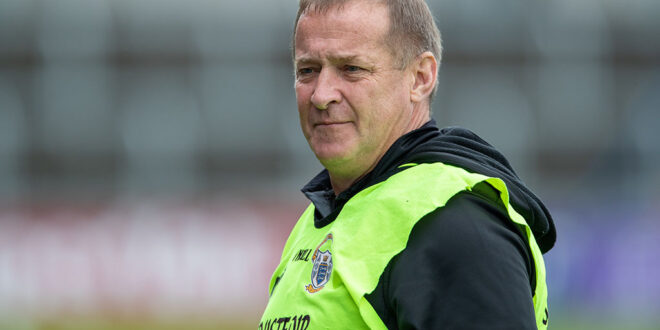 Clare football boss Colm Collins is aiming to have a new coach for his panel confirmed at the end of this month.

It follows the departure of Brian Carson who had spent two years in the role, with the UL lecturer outlining that personal and professional opportunities for the coming year were behind his decision to step away.

The remainder of the backroom team have committed to another season alongside the Kilmihil native, but the date for when that season will begin is currently up in the air.

The announcement by the GAA that all activity would be suspended until at least April means that a major redrafting of the fixtures schedule is now on the cards, with a repeat of last year’s schedule which saw the club championships run before the intercounty championship the most likely outcome.

Collins, who is also the manager of last years beaten Clare senior football finalists Cratloe, outlined that his preference would be for that option to be explored once more when the green light is given for a return to action.

“The one thing I would not like to see is a situation where they play the league, have the lads go back to the clubs and get them back together for the championship. I would prefer that the club go first and then play the league and championship together after that. The new league format has a lesser amount of games and that could be finished in four or five weeks so that is not as daunting a task as getting the seven games played in the old system. It really is just a case of wait and see but nobody can tell what will happen just yet. We have to see those numbers going down massively before we can even discuss what is going to happen next” he stated.

Two potential dates for recommencing on field training have now gone by the wayside already in 2020, but Collins is quick to point out that public health has to be the main point of concern when planning for the coming year,

“We were preparing to be back on the pitch and have everyone at the same level in early March but that is gone out the window now. It means we are back to the drawing board again and back to a different training plan which is quite upsetting and disruptive but that is where we are. The most important point to make is that the last thing we want is for anyone to be on a pitch where they are in danger of contracting Covid themselves or possibly passing it on to someone in their house who may be vulnerable. People’s health comes first and that has to be the most important thing. The lads have been great in the way that they have engaged and Rob Mulcahy has done a trojan job here in getting the S&C programmes out along with getting them to post their videos of workouts. There has been really good engagement and we have gone over stuff tactically on Zoom but nothing beats having them together on a pitch so you would really hope that will happen soon. We are at the mercy of those numbers and the medical people too. These decisions should be made only for genuine medical reasons when they say it is safe to go ahead” he said.

Collins also detailed that while his squad managed to stay largely Covid free during their autumn campaign in 2020, he feels that the new variant of the virus creates bigger challenges to deal with which are of concern.

“We took every precaution that we could last year. We did no work inside, the lads came to training in their own cars, there were temperature checks taken regularly and everyone was aware of what they had to do. We had no cases that were tied back to any of our training sessions and anyone that did have any issues, it was to do with somewhere that they had been outside of our camp. The one thing I would say is that the new strain seems to be a lot more contagious than the old one and at this time last year, very few of us knew people that had it. Now, we all know someone who has had it and it seems to be the case that most households have either had a case of Covid or have had someone who had to isolate because of being a close contact. It is a different situation now and I believe from people that I know who have had it and cannot figure out where they would have picked it up, this new strain is much more contagious and we have to so careful with that. When we followed the guidelines with the old strain, there was no problem. Close contact was deemed to be someone who spent 15 minutes in an indoor setting but from what I am seeing, that is no longer the case. I know people who have had it and cannot trace back to where they picked it up so that is worrying and makes this new strain much more dangerous I think” he concluded.