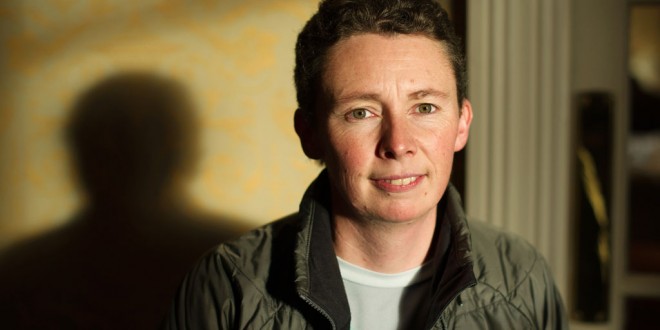 Jacinta Mc Guane of Corofin, who is returning to Haiti where she has worked as a volunteer for the last two and a half years. Photograph by John Kelly.

A Corofin woman will spend this Christmas in Haiti volunteering with orphans, while on holidays from the NGO job she started this summer.

In July, Jacinta McGuane took up her new role as general manager with Camara Education Ltd, an organisation dedicated to using technology to improve education and livelihood skills in disadvantaged communities around the world.

In 2010, Jacinta decided to leave her teaching job in Dublin to volunteer in Dominican Republic, on the other side of the island of Hispañola.

After a year as a special education volunteer with charity Nuestros Pequeños Hermanos (our little brothers and sisters) she moved to the Haitian branch of the same organisation, Nos Petits Freres et Soeurs, in September 2011.

Jacinta spent the past three years as a special education volunteer in St Helene. There, she developed and ran a special needs project with local staff, catering for children with learning, emotional, physical and behavioural difficulties. Alongside that, she was visitor and volunteer co-ordinator, as well as a translator for visiting fundraisers and staff.

With this background, as well as her professional proficiency in French and Haitian Creole, not to mention Irish and a little Spanish, it is no wonder she landed the position as general manager with Camara Education Ltd in Port Au Prince earlier this year.

Although she has lived there for over three years, adapting to life in Haiti, especially in rural areas, has been challenging.

‘Two hours from everything’

Haiti is the poorest country in the western hemisphere according to the CIA World Factbook and rural Haiti is even worse off. The St Helene orphanage in Kenscoff, is about two hours away from the capital and “two hours from everything”, Jacinta told The Clare Champion when she was home earlier this year. Late last year, the orphanage was targeted in a violent robbery, which left one staff member dead.

“In the mountains, we used to be able to go for a walk on our own. On a Sunday, we would walk for about an hour or hop on the back of a bike to a restaurant made of recycled materials, just to go and have a coke and meet your friends. We did that without thinking. After the robbery, we couldn’t do that anymore,” she outlined.

“Up to then, we were a bit more free to use public transport but after that, we were asked not to. We could only leave when there was a ride organised to come and go,” she said.

“In our city hospital, there is a curfew at 5.30pm and you had to be back at the compound. Unless you are in a vehicle, you are not allowed out on the streets because of the area it is in. Everyone understood that but in the mountains, we would have felt very safe,” she added.
A major cultural difference between Ireland and Haiti is the attitude to healthcare.

“Where I lived, people don’t believe in white medicine. One of the hardest things for me is that you see someone who is sick and you say ‘you need to go to a real doctor’ and we had one, but they say ‘oh no, I’ll go to my friend the voodoo doctor and take a cup of tea or potion and then come back’. By that time it is an emergency. You are looking at them and asking ‘did we not have this conversation?’ Even the nurses will go to the local people before they will go to the doctor they work with,” she said.

“They really don’t believe in white medicine and the thing is that when they go, they go too late…when you go there, you die,” she added.
With Nos Petits Freres et Soeurs, Jacinta worked as a special needs volunteer. She described her role.

“From 8am to 5pm most days, I was working in school. I worked with children who have failed in mainstream. What we are trying to teach them is skills that they can use when they leave the school or the orphanage. We have found families to take them in and who treat them as a member of their family and then they go to work placements every day,” she outlined.

A big change in lifestyle

“Before I came out here, I was the acting deputy principal of a Gaelcoláiste in Dublin, so I was dealing with timetabling, with staff and I taught Leaving Cert physics and science through Irish, so I was busy translating everything to Irish.

“I used to canoe three or four times a week if I could. I had a good social life too, with all my school friends and college friends but, in Haiti, you don’t have that. You live in a compound,” Jacinta explained.

“At home, I worked with special needs kids and their parents, mainly preparing them for secondary school. When I came here as a special education volunteer, I lived with them too. To the kids, you are their parent,” she added.

Jacinta said she would find it difficult to teach in an Irish school at the time.

“Here, you can take a lot of things for granted. You know your phone will work. You know that you will have electricity 24 hours a day. You know you will have internet 24 hours a day if you want it. After a hurricane, we might not have electricity for weeks and weeks on end. In general, we depend on our generators. They run until about 7pm. You have to get into the routine that once it is dark, you go to bed. In Ireland, you can watch TV or go on the computer or whatever but there, when it is light you are out, when there is no light, you don’t go out,” she explained.

Jacinta acknowledges that volunteering abroad is not for everyone but for those who would consider it, she has a little advice.

“Anyone thinking of volunteering somewhere should first try it for a couple of months. Then, if they like it and they think they can manage, they should think about staying for a year…The first year is the hardest because you are getting used to the language and the culture and the culture is so, so different. The first year is really the settling-in year,” she said.

Her second tip is for the protection of the children. “Don’t make empty promises to the kids when you get there because once people go back to their own countries, they often forget but the children won’t and they will continue asking about them”.

Since the summer, Jacinta has been working with Camara but has kept up her volunteering at the orphanage on weekends and holidays.

“I am still running and supporting our L’Ecole Junior des Arts et des Metiers, with the kind support of friends and family. It is a programme that teaches children with learning difficulties life skills and basic literacy and numeracy. In my new role, I have employed five orphans who have grown up in the orphanage and were un-employed. We have trained them to service, install and upgrade computers and network systems for schools and adult education programmes here in Haiti. We trained over 250 teachers in basic IT skills and how to blend IT and the Haitian school curriculum,” she explained.

“School books and reading books are almost non-existent in Haitian schools because families can just about afford to send their children to school. It is estimated that over 80% of the schools in Haiti are privately run. Each computer has the entire Wikipedia encyclopaedia pre-installed. We teach the teachers how to use this resource for reading, comprehension and research in various other subjects,” she added.

“Every Saturday morning, we run computer classes for youth leaders from Cite Soleil and single mothers, in a safe location, away from the protests and gunfire. Cite Soleil is often described as the ‘worst slum in the western hemisphere’. Yet, they are proud to be from Cite Soleil, from youth projects such as Sakala and Konbit Soley Leve, two inspiring projects which empower their youths through sport, education, culture and respect.

“Every Saturday the class is full – always 100% attendance. The class of 20 youth leaders are always here, smiles on their faces, greeting their teachers, Nancy and Jennie, with the typical respectful kiss on each cheek. Can you imagine a student in most other countries doing this? Early on a Saturday morning, you would be lucky to get a ‘good morning’ from them,” she continued.

According to Jacinta, the computer students are not just respectful to their teachers but also very appreciative of the donor who sponsored their participation in the class, run by Camara Education in partnership with Haven, an Irish organisation, which has been building homes throughout Haiti since 2009.

“This group is already asking what will they be able to learn on the level two course, once they complete their level one course. Running the courses at the Stellar Convention Centre ensures that the classes will run every Saturday, unhindered by violence, which is a regular occurrence in their neighbourhoods,” she outlined.

Jacinta plans to spend her Christmas holidays volunteering with the children of St Helene.

“We will run art, Spanish, English, sport, health and artisan classes. In the artisan classes, the children learn to make jewellery from natural and recycled materials. We don’t just have three or four children to keep occupied, we have 387, ranging in age from three to 20 years, and adults with special needs who are in their 30s, who all want to have fun and learn something new. Then we will sell the artwork and jewellery to help towards the cost of the teacher and the art supplies. A great big thank you to Art and Craft in Ennis for all the amazing beads,” she added.

Anyone wishing to, can donate to Nos Petits Freres et Soeurs using the IBAN: IE23 BOFI 9007 4642 8636 21, BIC: BOFIIE2D. The account is at the Bank of Ireland, Dublin Airport and is in the name of Our Little Brothers and Sisters, 6 Brookwood Avenue, Artane, Dublin 5.
To donate to Camara, log on to www.camara.org/sponsor.