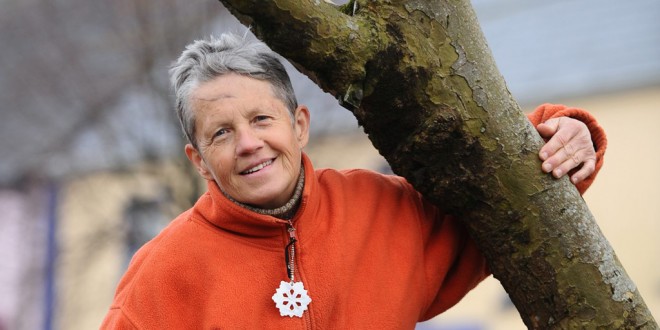 Didi Driscoll, the director of Sunrise Education Trust and a member of the Amurtel disaster management organisation. Photograph by John Kelly.

WHITEGATE resident and volunteer with NGO Amurtel, Didi Ananda Prama Driscoll returns to Haiti this December to help continue her work with those displaced by the 2010 earthquake that devastated Port Au Prince.

This is Didi’s third year working with Amurtel in Haiti and on this trip she will spend two months in Port Au Prince, where she is hoping to develop a project growing spirulina, a super protein food.

“There are still 250,000 people in camps. One and a half million lost their homes in Haiti during the earthquake. We work mainly with women and children and we still have schools and our children’s homes have expanded. We now have two children’s homes, one in Port Au Prince and also another on the border with the Dominican Republic. We still have programmes with women, where we do microfinance. That’s where we give them a little money and they see what they can do with it, for example if they buy some vegetables and make some soup and sell that,” she said.

Her idea to grow spirulina came to her following her experience volunteering in Kenya in 2011.

“The year before last, the UN declared a famine in the horn of Africa so I went to Kenya, where I started a project to grow spirulina for malnourished children. It is a super food,” she outlined.
Spirulina is a blue-green algae that has a high alkaline pH. It has a very high protein and nutrient content and is grown in water.

“In Kenya the first year we had two ponds and last year we went back and we doubled them and now we have four ponds and we are growing enough to sell it, while half of it we are giving to malnourished children. We did a programme last year where we had 100 children where we gave them porridge and spirulina for three months. We tested their height, weight and arm circumference and it was very successful.

“So now I want to go and do this in Haiti and grow spirulina there. Right after the earthquake, we got donations of spirulina and I gave it to some of the really malnourished children, who were really not doing very well and they did brilliantly. It can be a small-scale industry for woman and it is something that the village women can learn,” she explained.

Didi explained it is grown in small troughs like mini-swimming pools that are about 2m wide, 10m long and 40cm deep. These are then filled with 30cm of water and live spirulina algae is added. However, there is a science to the process.

“You get it in a bucket and you increase its density from a bucket to a bigger bucket, until you can put it in this big pond. Once it is at the right density and at the right temperature and pH, it grows and can be harvested. The pH in spirulina is quite high, pH 11. You actually have to add bread soda so you can get it to a pH of 11. The good thing about that is that most things won’t grow at that pH, so you are pretty sure is just spirulina that’s growing but we do look at it under the microscope.

“Every day it grows and blooms and you can skim it out every morning and put it in cheese cloth, like you were making cheese. You spread it out on racks and dry it in the sun and you get this crunchy spirulina. It is really high in protein. It is like the highest protein food you can eat,” she said.

Didi leaves for the United States on December 5, where she will do some further fundraising and plans to be in Haiti before Christmas. She said things have changed somewhat in the last two years in Haiti but the poor remain poor.

“There is a lot less stress, people have come to deal with the trauma. The people who are well-to-do have fixed up their houses and it is now all the poor, that last 250,000, who don’t have a place to put up a house or there is rubble where their house was still. A lot has been removed and they continue to remove trucks and trucks of rubble but that will take an extremely long time to sort out,” she said.
She explained there was a cholera epidemic when she was last in Haiti, which spread with poor sanitation.

“People often didn’t know what to do about it. They were so afraid. People were dying on the streets. We were picking up people and putting them in the car and rushing them to the hospital because nobody knew what to do. That has got a little bit better because there is a large information campaign. In our schools we are teaching children how to wash their hands, how to make rehydration drinks and what causes it. We also had a medical team who would go out anywhere there was a cholera epidemic. I went with them one time and it was good to see how with care it could be dealt with,” she continued.

In the past Didi has been supported locally and, in particular, Whitegate National School raised €600 for her Kenyan trip. Didi is hoping local groups or schools might be interested in helping to fundraise to help with the spirulina project in Haiti.

She is offering to speak to groups or schools about the earthquake in Haiti and the relief work being done there. “I think it is good for children to know how blessed they are and to understand that some people aren’t so blessed,” she said.

She recalled when she first arrived to Haiti and why she keeps going back.

“They gave me this baby and told me to take care of her and she was so malnourished and to see her now she is so healthy. We gave her some high protein food, like spirulina. To see those children develop is wonderful. Haitian people are very friendly, they are really nice and once you meet them you fall in love and you want to help anyway you can because they really have had such bad luck,” she said.

Anyone who would like to help can get in touch with Didi at sunrisefarm@eircom.net or 083 3983833.