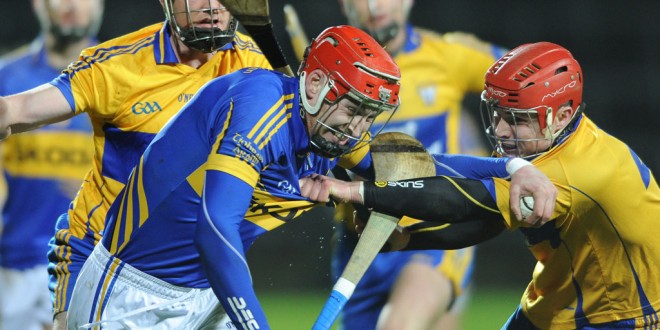 Denis Maher of Tipperary in action against Cian Dillon and Paul Flanagan of Clare during the Waterford Crystal Final at The Gaelic Grounds last year. Photograph by John Kelly.

SIXMILEBRIDGE will host the Waterford Crystal senior hurling quarter-final between Clare and Tipperary on Sunday at 2pm.

A repeat of last year’s final, which Tipperary won at the Gaelic Grounds in Limerick, the Premier outfit go into Sunday’s tie with the benefit of a first-round win, as a result of which they will carry the favourites’ tag on Sunday.

On Friday, January 9 at Dr Morris Park, a hat-trick of goals from Seamus Callinan helped the holders to a 4-16 to 1-16 win over Mary Immaculate College from Limerick. Callinan, one of the stars of last season, finished that game with a tally of 3-7.

Tipperary fielded a relatively strong side in last week’s game, while experimenting in some positions. Paul Curran, Shane McGrath, Conor O’Mahoney, Pádraic Maher, Kieran Bergin, Gearóid Ryan, Patrick Maher, Seamus Callinan and James Woodlock all saw action against the Limerick college and are expected to be in the squad again this week for the clash with Clare.

These counties have clashed in the final of this competition for the past three seasons, with Tipperary winning two of those games. They are also due to meet in a few weeks time in the league.

Clare’s team for Sunday’s game is likely to be along the lines of that which played in Kilmallock last week.

Panellists who played with their colleges in this competition last week, such as Tony Kelly, Jack Browne, David Reidy, David McInerney and Stephen O’Halloran, are not eligible, while a few more of the squad are currently battling injury, including Peter Duggan, Jamie Shanahan, Seadna Morey and Daire Keane.

According to selector, Louis Mulqueen, “There are a number of players unavailable to us this weekend. In addition to those who have played with their colleges in last week’s first round, we have a number of injuries.

“On top of that, the U-21s are away this weekend following their All-Ireland success last year. A number of them are due back on Sunday morning but we don’t know yet whether or not they will be available. We are determined to be competitive in every match and to win every game we play.

“Clare are in a better position at the moment than we were at this time last year but there is still serious work to be done. We slipped a little last year and we have to catch up this season. Kilkenny and Tipperary progressed and brought the game to a new level.

“Fellas came back hungry this year and I hope that this is positive. I hope we can continue the conveyor belt and bring the new lads coming in to the level we need them to be at,” Mulqueen said.

Acknowledging that Clare have slipped in the ratings based on not winning a championship game last year, he said, “We are trying to get back to a competitive level. We need to be patient and supporters need to be calm. It’s a level playing ground with everyone out to beat Kilkenny.

“Wexford and Limerick have progressed a lot, while there is a lot at stake for Tipperary this year, having come so close last season.”

“We have had good wins in a few games to date and all these games are good for the young lads to be playing in. We will be down eight or nine of our panel for Sunday but that’s what we have a panel for,” he concluded.