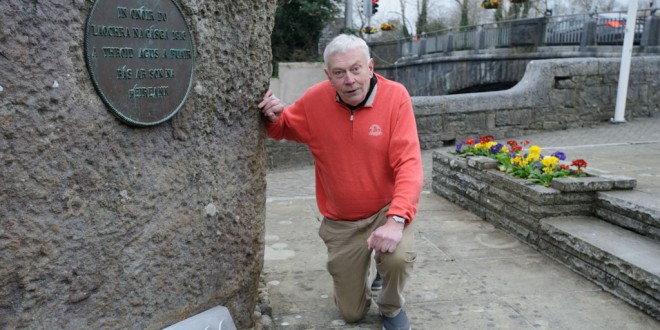 Rising Against Cancer...Ennis man Tony Finucane who is taking part in a 48 hour fast in the square, Ennis on April 7th and 8th as part of a four-event programme to raise funds for Slainte An Chlair. Photograph by John Kelly.

A former bank manager is banking on Clare people to join him in a 48-hour fast to raise funds to support the growing number of cancer patients in the county.

Tony Finucane came to Ennis to work in Bank of Ireland as a clerk in 1977 and remained with the same bank until his retirement in 2012, which included 15 years as a manager. Over the years, the Newcastle West native worked all over the county, in Ennis, Shannon and Miltown, until his last post in Tulla.

The 66-year-old is appealing to locals to join him during his 48-hour fast, which starts on Wednesday, April 6 at 8pm and runs until Friday, April 8 at 8pm.

“Anyone is welcome to join me on the fast for a number of hours to raise money for Sláinte an Chláir. An acquaintance of mine got cancer in February 2015. The centre provides fabulous support and services for people who have cancer and their families,” he said.

Tony stresses that volunteers who wish to join can do so for any specific period and don’t have to commit to fasting for a full two days.

This isn’t the first time Tony will confine himself to drinks like water, tea or coffee without any sugar for an extended period, having previously undertaken this feat for the Ennis Round Table organisation in the 1980s. The group, which was akin to a Lions Club for young people, completed a number of fundraising ventures for charities at the time.

Tony will be accepting donations on Thursday, April 7 and Friday, April 8 for Clare Sláinte an Chláir, as part of its Banner Rising Against Cancer initiative.

In addition to the fast, Tony is one of the volunteer drivers who transports patients to and from hospital appointments in University Hospital Limerick (UHL) and Galway University Hospital. Urging anyone who has a few hours to spare to become a volunteer driver for the centre, he explained that some people who live in rural, isolated areas do not have anyone to take them to appointments.

He added that a lot of patients couldn’t afford to pay for the cost of taxis to and from appointments, which one cancer patient from Ennistymon estimated would total an estimated €4,000 a month.

The number of runs he makes varies from week to week depending on the demand and availability of drivers.