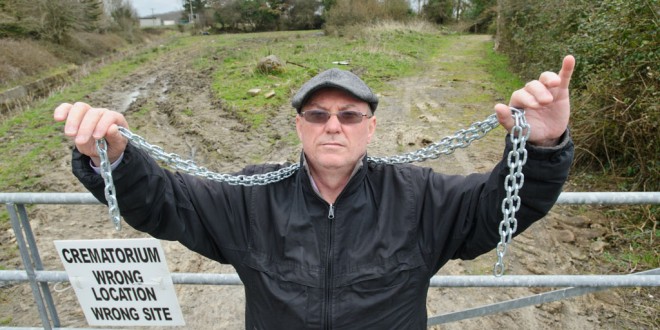 Shannon resident Pat Madden who is going to chain himself to the gates at entrance to the site of the proposed crematorium, in protest against the site chosen. Photograph by John Kelly.

ONE Shannnon man has vowed he will chain himself to gates at the site of the proposed crematorium at Illaunnamanagh to stop machinery getting in to start work.

Pat Madden says he is utterly determined to prevent the crematorium going ahead at the current location, which he says is very inappropriate. “I’m only speaking for myself here now, my colleagues and I have to debate it, but I am prepared to chain myself to the gate. Should it proceed a bit farther, there is another option open to me,” he said.

While he didn’t go into detail on what other options he might be considering, he added, “I’m prepared to take very, very extensive measures, but that’s not a threat of violence or anything like that.” However, he indicated that his own personal safety might be at risk.
Even if the crematorium were built, he said he would be moved to protest when funerals began. “If it is finished, the first hearse that will come down that driveway – and I wouldn’t show disrespect to anyone, the deceased especially – but I will be there to meet them. This is not like me but that’s the way it is.”

Summing up his views on the process that has led to the path being opened for a crematorium, the taxi driver said, “It’s politically wrong, the planning is wrong, everything about it is wrong. Everybody knows that but nobody wants to do anything about it.”

The crematorium had to come before a meeting of Clare County Council recently, following delays in completing the sale of the site. While it passed, there was some opposition.

The decision of the full council to approve the sale of the land for a second time came despite a recommendation from the Shannon Municipal District that the site not be sold.
It is now many years since the development of a Shannon crematorium was first proposed by Tony McMahon and Sean Hillery. Its development at the current location has been opposed by residents every step of the way since.

Last year, developer, Jim Cranwell estimated that an investment of well over €1 million would be required to build the crematorium, while he estimated that around 30 jobs would be created in the first phase of its construction.