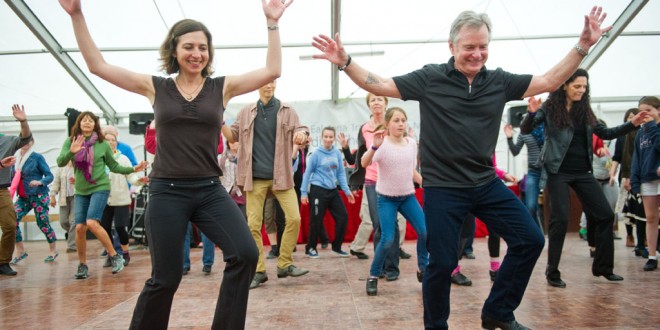 On Monday afternoon, the main street in the West Clare town teemed with people, while inside the open doors of the public houses, music wafted towards the open air.

At Hennessy Memorial Park, the pavilion resounded with set dancers pounding the afternoon into evening, while even the old dressing room building was packed with students and tutors.

Kieran Jordan, who is from Philadelphia but has lived in Boston for more than 20 years, was one of the teachers, along with Kevin Doyle from Rhode Island.

While leg and soft muscle injuries are more associated with sport, Kieran has been on the treatment table a fair bit herself. She counts torn hamstrings, a torn ligament in her foot and a torn hip cartilage as amongst the strains and knocks she has encountered while dancing or teaching it.

“It makes you reflect and say to yourself ‘do I want to get back on the horse?’ Is it something I can still do? I have done my physical therapy because this is me. It’s my form of expression. It has been important for me to get back into it. There is wear and tear. Hard floors and stuff like that are not good for our joints,” she smiled.

“It’s also a great happy pill. The music keeps you happy,” Kieran replied, when discussing what traditional music means to her.

This week is her first time setting foot in Miltown Malbay. She likes what she has seen and heard so far.

“I would love to come back here. I’ve always wanted to come because I’ve been an Irish step dancer all my life, since I was five-years-old. This was my first opportunity to come and I’m teaching here this week. If you’re into Irish music and dance in America, everybody knows about Willie Clancy week,” she said.

Kieran has found that summer schools across the US in particular are influenced by what happens in Miltown every July.

“I heard the organisers say the other night that many of the other summer schools model themselves on this one. It’s definitely true. I have taught at many of them in the US.”

Her family lineage can be traced to Ireland. “My dad’s family came from Ireland originally. I just fell in love with Irish dance and music at a young age. I never thought I’d be doing it as a full-time occupation. I have been for a long time. At a certain point I felt there is nothing else I could do. I don’t know if I’m qualified for anything else. But I do love it, teaching, being on stage and collaborating with people. It’s a privilege,” she said.

Kieran was speaking at what she called a fringe event. “I met Michael Tubridy, who started coming to Boston in the last few years on a small east coast tour. I’ve been hosting him at my dancing schools to do workshops, specifically in the older style, which comes from Dan Furey and James Keane. It’s a very unique set of dances. The movements are not movements that I have seen over my lifetime,” she marvelled.

Kevin Doyle is teaching and lecturing, along with Kieran, this week. This is his second visit to Willie Clancy. A retired city of Providence bus driver, teaching tap dancing is amongst his repertoire.

“Two years ago I was here as a student and I met Harry Hughes. Harry was interested in how I got here and how I heard about Miltown,” Kevin, who holds a National Heritage Fellowship in the US, explained.

“Kieran and myself were asked to do some workshops. What we’re doing is exploring the Irish roots of American tap dancing,” he said.

Like Kieran, Kevin has found that similar festivals dot the US. “This is being used almost as blueprint for many other Irish weeks across the US and in other countries as well. This is the formula that they used,” he said.

A member of the band Pendragon, Kevin lives for the music. “That’s my passion,” he smiled, before he was drawn back towards the beat of Willie Clancy week.