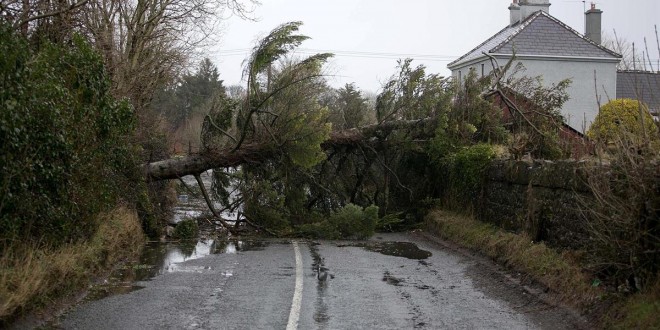 TENS of thousands of people in Clare were affected by hurricane-force winds which battered the county on Wednesday in the most recent storm to hit the country.

More than 20,000 homes and businesses were without power on Wednesday evening with ESB Networks stating that this situation and that continues to be the case on this Thursday.  In fact some homes, farms and businesses may be without electricity and water for at least another day.

Fallen trees blocked roads in many areas, buildings were damaged and a number of road accidents, including two incidents of trucks jack-knifing, took place as extremely high winds swept through the county from early afternoon.
Shannon Airport was closed for much of the day due to high winds. A plane parked there was blown over on its side but was empty at the time and no one was injured in the incident. Met Eireann’s radar at Shannon Airport was also damaged by high winds. 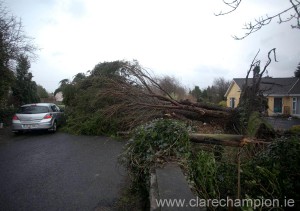 Clare County Council, An Garda Siochána, the Fire Service and Clare Civil Defense responded to more than 150 separate weather-related incidents around the county during the course of the afternoon.
While many of the roads that were blocked on Wednesday are now open but it could be some time before electricity is restored to all areas.
ESB Networks confirmed on Wednesday night that the high-voltage network would take priority over local lines and that work was not likely to begin on line inspection until first light on Thursday, weather permitted.
“At the moment there is a huge amount of work to do in restoring the power to the high voltage network, and until we know what damage is done to that we won’t be able to start on the low voltage network. Really the transmission network is the backbone of the whole network and there are a lot of faults on that. This is going to be a very challenging time to be working through. The damage is very extensive and we haven’t seen anything like this in a long time,” a spokesperson for ESB Networks stated.

“Our number one concern right now is to make sure the network is safe because the damage is so extensive. It was very difficult to get people onto the wires [on Wednesday] because the conditions were so bad,” the spokesperson continued.

Clare Fire Chief Adrian Kelly has urged people without power to be particularly conscious of fire safety in their homes.
“Because of the number of power lines down, people are starting to use candles to light their houses and we would appeal to people that just because we have storm damage don’t forget to mind your own safety in your own house with candles. Remember we have enough to be doing without having to go to people’s houses,” he said. 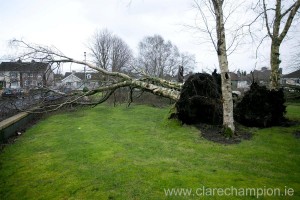 Previous Know my number, save my life
Next Storm repair costs rising 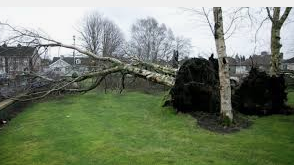