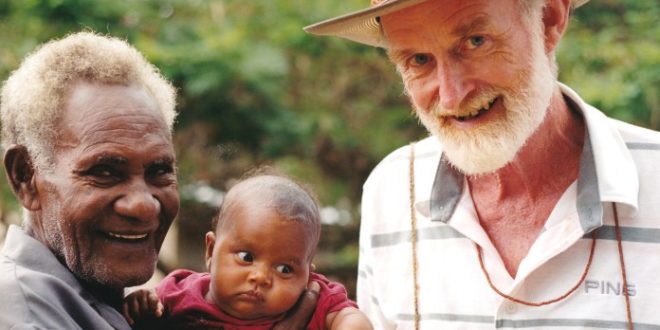 IT’S a long way from West Clare to Papua New Guinea, but Fr John Glynn who is a long-time citizen of the island nation still holds his native Kilkee very close to his heart. Currently on lock-down until at least early June, Fr John, who is full of energy and drive, despite his 80+ years, told The Champion he is keen to return to normal daily life. For the retired teacher, that includes working with some of the country’s most vulnerable, as well as co-hosting a weekly one-hour radio show on the Catholic station, Radio Maria. Over his many decades in Papua New Guinea, Fr John was instrumental in setting up the WeCARe! Organisation, to work with the poor and disadvantaged who make up a considerable percentage of the state’s eight million citizens.

Fr John described his adopted home as “an absolute paradise” in terms of its beauty, but a land of deeply ingrained inequality.“Illiteracy rates here are around 85%,” he noted. “Most people live in rural areas, but in the capital [Port Moresby], where you’ll find five star hotels, you have the settlements which are effectively slums.” The settlements, which are rapidly expanding, are characterised by extreme poverty and high crime rates, and it is among these shanty towns that WeCARe! and Fr John aim to offer young people the chance of a better life. After more than five decades in the country, Fr John is deeply aware of the challenges the country faces, but nevertheless, very optimistic about its future. “We are a developing country, but our economic potential is probably ten times that of New Zealand,” he affirmed.

Fr John came to Papua New Guinea, which makes up the eastern part of the island of New Guinea as well as a cluster of islands the largest of which are New Ireland and New Britain, in the western Pacific Ocean, in 1963. In his early 20s, he bid farewell to his family, the well-known Kilkee family whose business interests extended to flour-milling and coastal shipping. His father, Will, was director of the company, while his mother, Kit was a nurse. One of three boys, Fr John’s brother Willie also became a teacher. His younger brother, Robert, tragically died from leukaemia at the age of just 18 in 1958.

On his overseas travels, Fr John’s first port of call was England, then Australia. When he moved to Papua New Guinea, he found his vocation as a teacher and drew on the skills he had learned at home in West Clare in terms of fitting into the local community. “I was always a good mixer,” he explained. “Back at home in Kilkee when I was a child, my mother would always have her friends around and I loved that. I just got on with people, and when I came to Papua New Guinea, I found they were very like the people I had known at home, because so many people here are farmers are fishermen. Community is also a very big priority for people here.”

It wasn’t until he was 40, that he went to train for the priesthood. Ordained in 1980, he became a citizen of Papua New Guinea seven years later. “I was never very pious,” he said. “That wasn’t my way. I suppose I drifted towards the religious life. I was a teacher first and when I saw the work the missionaries were doing here, that just blew me away. There were lay missionaries from Australia and religious missionaries from America. What I wanted to do was slightly different though. I didn’t want to leave Papua New Guinea. I knew that if I joined a missionary order, I would be moved around. When I became a priest, I was a Diocesan one, which would have been unusual for a white man here. Then I became a citizen. I see myself as being a bit like St Patrick. He came to Ireland and he didn’t leave.”

Papua New Guinea is a country of huge natural wealth and a major exporter of gold, copper, oil and natural gas. But, with its wealth came decades of political instability. Today, the state, which is a constitutional monarchy and part of a commonwealth of nations, has a huge social and structural problems.

“When I came here in 1963, a lot of people were still living what we might regard as stone age lives,” Fr John said. “The majority of the population lives in remote, rural areas and they are a hugely resilient people and tribal and family bonds are very strong. One of the biggest improvements has been the arrival of Denis O’Brien’s company Digicel and the work of the Digicel Foundation, I’m on their board here. We have had a lot of support from JP McManus also and a number of other wonderful supporters.”

Returning to Ireland, every six to seven years, enables Fr John to maintain his many contacts in West Clare, Dublin and Cork – where he studied engineering for a time. “I didn’t become an engineer, but I made some friends who are still in touch with me to this day. They’ve made donations to my work, something from which I’m very grateful.”

Close to his heart are his family around Clare and also former Bishop, Dr Willie Walsh who he credits with “saving my life” after Fr John was “effectively excommunicated” for no apparent reason in the late ‘90s. He had been the Parish Priest of Karu on the island of New Ireland in 1992, an unusual thing for a white man, he acknowledged. He found himself suspended from his ministry, with “no explanation and no appeal allowed”. He returned to Ireland in 2000 and spent most of the year helping out in the Diocese of Killaloe. In 2001, he returned to Papua New Guinea, this time to Port Moresby, where he was welcomed with open arms by the archbishop and reintegrated into teaching and ministry. His unstinting devotion to his adopted country have been the subject to two TV documentaries: Paradise Island, in 1999 and Lifers in 2013; both made by RTÉ.

Two years ago, he returned to Ireland for a visit and some medical treatment. “I got a new heart valve and a new knee and both are serving me well, thankfully,” he explained.

The arrival of Covid-19 to Papua New Guinea towards the end of March cast a cloud over the country, but to-date, the available official figures for mid-May record no deaths from the disease. “The lock-down here has kept me mostly at home,” explained Fr John. “I’ve been bored out of my skull, I would normally be out and about and visiting the settlements occasionally. I’m full of energy so being stuck in the house has been frustrating. I only get out to the bank or the shop and we are hoping the State of Emergency will come to an end, to some degree at least, by June 3, and we’re hoping for a return to some kind of normality.”

Fiona McGarry joined The Clare Champion as a reporter after a four-year stint as producer of Morning Focus on Clare FM. Prior to that she worked for various radio, print and online titles, including Newstalk, Maximum Media and The Tuam Herald. Fiona’s media career began in her native Mayo when she joined Midwest Radio. She is the maker of a number of radio documentaries, funded by the Broadcasting Authority of Ireland (BAI). She has also availed of the Simon Cumbers Media Fund to report on development issues supported by Irish Aid in Haiti. She won a Justice Media Award for a short radio series on the work of Bedford Row Project, which supports prisoners and families in the Mid-West. Fiona also teaches on the Journalism programmes at NUI Galway. If you have a story and would like to get in touch with Fiona you can email her at fmcgarry@clarechampion.ie or telephone 065 6864146.
Previous “I find Sundays very long” Marty Morrissey on lockdown and missing championship
Next New community group seek a Better Ennis with “healthy and happy streets”