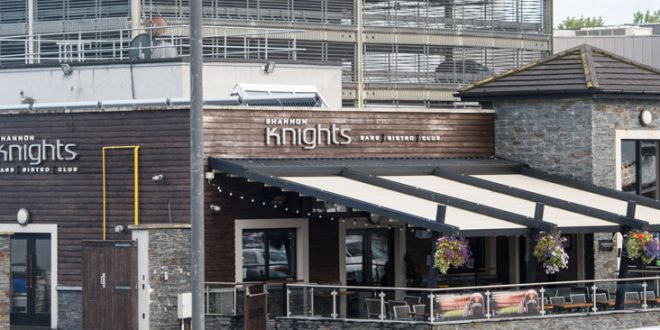 Established in 1972, the Shannon Knights, the iconic bar and bistro and one of the most prominent social venues in the town, has entered receivership.

A member of management said employees are, as yet, unaffected and that the outgoing owners had been good to work for and are well regarded in the community.

Shannon Knights embarked on a multi-million euro revamp some years ago and when it reopened in 2010, there was talk of expanding its clientele to Ennis and Limerick, but economic conditions proved very challenging thereafter.

Annual accounts filed in 2015 and prepared by Curtin, O’Friel & Co Chartered Certified Accountants, showed that in the year to the end of August 2014, Shannon Knights had accumulated losses of €1,745,549. The accounts also showed that there were bank loans of over €3.4 million to be repaid.

The most recent accounts, which were filed this summer, showed the company still had loans totalling €3.376m, with a sum of €155,856 repayable in one year or less. The company was continuing to employ an average of 75 people, 72 working in its bar and restaurant and the others in administration.

Local Councillor Mike McKee said he was very saddened at this week’s turn of events.

“I have known the Quish family for many, many years. I was one of the first people who met Aidan Quish when he came in first of all. My whole family have worked there off and on for different periods of time.”

Councillor McKee said Mr Quish had been very helpful to many people and been very supportive to local clubs.

It’s obviously devastating for Aidan to have been at the helm for many, many years. He was very well known for being good to the people of Shannon during times of need. When there was a funeral he was always there to help out, he would supply as much drink as was needed and he wouldn’t chase people, but people would pay him.

“He helped out in ways people wouldn’t know about; people with financial problems, he would help them without looking for praise, he would keep it to himself. He was very generous when it came to supporting clubs, he constantly sponsored them and it’s so tragic that a person who was so good to the people of Shannon has lost this business that everyone in Shannon grew up with.”