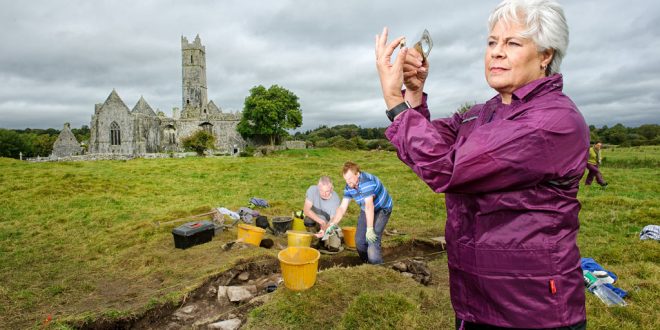 Jenny Sacher, a volunteer from Cleveland, Ohio, examines an early 17th century Clay pipe piece, which she found within hours of her arrival to take part in an archaeological dig, adjacent to Quin Abbey. In the background are volunteer John Mc Grath and assistant director of the dig Joseph Mc Cooey. Photograph by John Kelly.

AN American apprentice archaeologist, who flew in from Ohio to participate in the archaeological dig at Quin Friary earlier this week, has uncovered the first artefact, a clay pipe that dates back to 1628.

Jenny Sacher from Cleveland, Ohio, has worked with archaeologists Joe McCooey and Graham Hull previously at Caherconnell and when she heard that they would be conducting a dig at the well-known historical site in Quin, she offered to volunteer.

Mr McCooey said the find was made in trench one, where they believe there are remnants of a road and house.

“It is a very small old-fashioned clay pipe. The size of the bowl suggests the date. Clay pipes are very well documented and we can narrow them down through the years in a sequence. We have drawings of other clay pipes that we take our references from and we found that pipe in the sequence and that’s how we got the 1628 date. We only have the small fragment of the pipe, the bowl, but the bowl is actually the most important part to find because it is so well documented,” he said.

Mr McCooey said the significance of the discovery is that it gives them a date for when the building, believed to be a house, was not in use as opposed to when it was.

Two other discoveries have been made during the dig, including part of the original castle ditch or moat, with part of a wall structure attached to it, and a hearth.

“We opened up two trenches. Trench one was opened up over a possible house structure with a road beside it. We found a small hearth in the middle of trench one and evidence of burning and that’s near to where the pipe was. We found a similar one in Caherconnell. It’s a small area for burning in the centre of the house and the smoke would just go up through the straw roof. It’s a hearth in the middle of the room. We found evidence of bone which had been in the hearth, which had been re-burnt and re-burnt,” he outlined.

Richie Jones, a volunteer on trench two, explained what they had uncovered .

“We have got down to bed rock at the bottom end of it. There was a fair bit of bone lying around on top of the bedrock and we’ve kept some of bone as we hope to get dates for it. We appear to have found where they cut away bed rock originally to make the moat or ditch for the castle. That seems to have been filled very roughly with rubble and rubble with mortar on it, so it is possibly the remains of a much older building. At some stage, they appear to have built a wall. They put in a very rough clay foundation on top of the edge of the rubble but that tends to have been rubbed out.

“We didn’t find any good structure. There is a saying, if you find three stones in a line then it’s a wall; but we haven’t even found that. So we have found an awful lot of rubble in what appears to be the ditch. By tomorrow [Thursday] evening, hopefully we will have got down to the edge of what we are fairly sure is the moat,” he said.

Mr Jones said that while this goes down a long way, they will not be able to go down any deeper.

“We are going to get to the edge of it but no further because it’s too dangerous. It’s a fairly large building but it’s fairly confused at this stage and it’s quite likely that whatever wall was there for that building has been seriously dismantled and re-used,” he said.

Mr McCooey said the response they received from volunteers was “overwhelming”.

“We had a plethora of volunteers all week from all walks of life. It was a fantastic turnout. We’ve had people who are dental assistants, who are doctors, architects and you name it, every type of job, who just want to come down and experience this type of activity.”

“I don’t think the questions that we wanted answered have been answered by these two trenches and more needs to be done before we will have a definitive answer to those questions.

“I would like to see more work done on the site and what form that will take I don’t know at this time but we will have more information in the next two three months as to what we will do going forward. We are very happy with what we have found so far but there are still questions lingering,” Mr McCooey concluded.