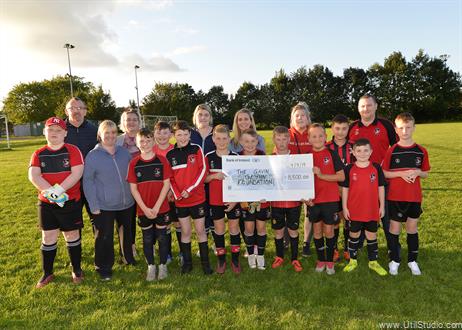 Shannon Hibs get behind brave Alex

It’s a cutting edge treatment for rare disease Embroyonal Rhabdomyosarcoma, which Alex was diagnosed with earlier
this year.

The family arrived in Germany on August 13 and on Wednesday, Alex’s mother, Agnes, said he had received 20 sessions of the Proton Beam Therapy, with 11 more left.

He has also had a cycle of chemotherapy while in Germany and will have another before he returns to Ireland.

“It’s only about half an hour a day for the treatment. There is one day-a-week where he sees the doctors and there are a couple of dressing changes. It’s just one day-a-week when we’re there for most of the day,” said Agnes.

Alex has coped quite well with the treatment.

“He’s good. There have been some minor side-effects. He’s having it near his throat, so there are some little issues but they are well on top of things here and he’s fine. He’s coping,” she continued.

While the treatment will be coming to a finish fairly soon, it will take some time before they find out how effective it has been. “It has to come later because protons light up on an MRI. If they were to do an MRI now, it would look like things were worse rather than better, because they would be lighting up. You have to wait for about four weeks afterwards.

“He still has two more chemo treatments when we go home as well. We’re expecting to go home around the end of September,” she noted.

Alex is a popular member of Shannon Hibernians Soccer Club and it recently raised €8,500 for the Gavin Glynn Foundation, through an underage tournament and raffle.

It is a welcome boost for a charity that has been very good to the O’Shaughnessy family.

“They paid for our flights and our accommodation and they gave us some living expenses, they’re fantastic.

“The HSE will pay for the treatment but not for anything else. We didn’t want to do any fundraising for ourselves, because the foundation were helping us. At first the soccer club wanted to do it for us, but this is their way of giving back on Alex’s behalf,” Agnes concluded.

Owen Ryan has been a journalist with the Clare Champion since 2007, having previously worked for a number of other regional titles in Limerick, Galway and Cork.
Previous Preview Of Clare Intermediate Hurling Championship Action
Next Kepak lay off all Clare employees and suspend €6.5m investment