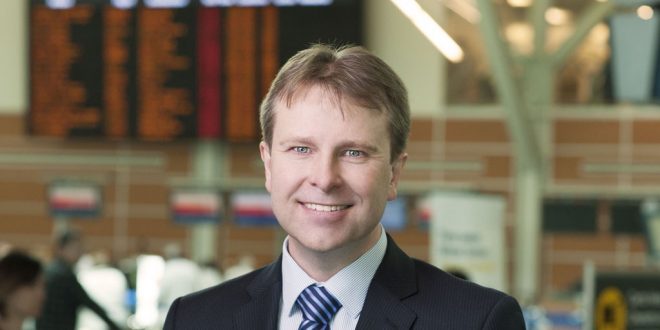 LESS than three years after he arrived, Matthew Thomas is leaving his role as CEO of Shannon Group.

He is set to take up a new position as CEO of the Ports of Jersey. Shannon Group Deputy CEO Mary Considine will take on the role of Acting CEO of Shannon Group after his departure in June.

Since his arrival in mid 2016 Shannon Airport’s passenger numbers have increased, but the level of growth has been very moderate, reaching just 1.86 million last year.

While this was an increase of 6.5% on 2017, it is not much more than half the numbers which used Shannon during the Celtic Tiger years, and the Clare airport’s growth was eclipsed by the increasing dominance of Dublin. Shannon is now way off the targets that were set for it as it separated from the Dublin Airport Authority at the start of 2013.

On the industrial side, during Mr Thomas’ tenure there was significant investment in the redevelopment of the Shannon Free Zone, while occupancy rates there reached 94%. Shannon Group also performed well in terms of tourism, with 925,000 visiting its attractions last year.

In a statement on Wednesday, Mr Thomas said, “We have made real progress in developing our business and organisation over the past three years. I regret that I will not be involved in the continued growth of the company.  However, I am looking forward to the exciting opportunity I have been offered to lead the development of the Ports of Jersey.”

Shannon Group Chairman Rose Hynes said, “On behalf of the Board, I would like to thank Matthew for this vital contribution to the growth of Shannon Group.  The Group is now on a very positive footing, primed for growth.  We are sorry to see Matthew go and we wish him and his family all the best for the future. We now embark on the task of appointing his successor.”

Amazon to have Shannon presence?