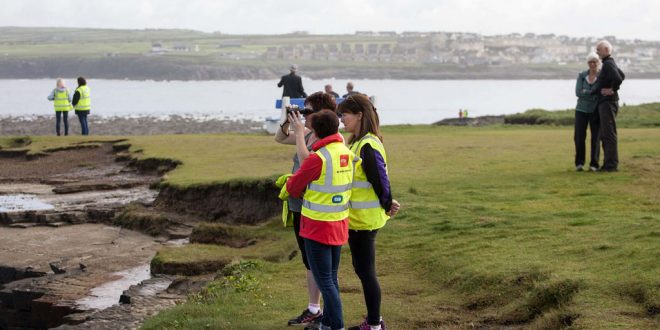 Searching continues at the cliffs in Kilkee on Tuesday for Lissycasey man David McMahon. Photograph by Arthur Ellis.

The search is continuing in Kilkee today (Tuesday) for David McMahon from Lisssycasey, who as been missing from his home since Friday last.

The alarm was raised when the 31-year-old did not answer his phone and his car was subsequently located in Kilkee, sparking a major cliff top and off shore search since then. The search is being led by main emergency services, backed up by a large number of volunteers.

The search took a tragic turn on Monday evening with death of Caitriona Lucas, during a search operation in Kilkee Bay. Originally from Ballyvaughan, the mother of two, whose husband, Bernard is also a rescue service volunteer, died when the Kilkee Coastguard Unit rib boat capsized during the search for David McMahon.

Another coastguard volunteer, Jenny Carway, was injured and removed by helicopter, while James Lucey was trapped in a cave at the base of a cliff for four to five hours before he was rescued.
Amongst those paying tribute to the late Caitriona Lucas were President Michael D Higgins and Taoiseach Enda Kenny, as well local politicians and Clare Clare County Council.