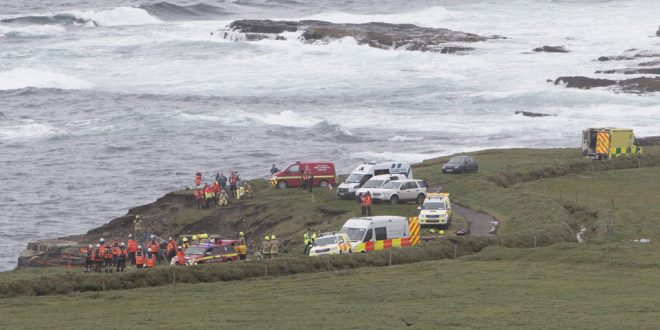 The scene near Kilkee where an Irish Coast Guard rescue boat capsized while searching for a man missing since Friday. Photograph by Press 22

NORTH and West Clare is united in grief today following the tragic death of Caitriona Lucas, who died during a search and recovery operation in Kilkee on Monday. Originally from Ballyvaughan, the mother of two, whose husband Bernard is also a rescue service volunteer, died when the Kilkee Coastguard Unit rib boat capsized during the search for missing Lissycasey man David McMahon.

Amongst those paying tribute to the late Caitriona Lucas, a Clare County Council employee, was An Taoiseach Enda Kenny. Another coastguard volunteer, Jenny Carway, was injured and removed by helicopter while James Lucey was trapped in a cave for four to five hours before he was rescued.

Speaking to The Clare Champion two years ago this month, Jenny Carway, who is originally from Somalia, poignantly outlined the challenges involved.

“You have your good times and your bad times but you’re here to provide a service and, hopefully, we have provided a good service here. Not always in the best of circumstances but if it’s a fatality it’s always a relief for the family to have the deceased brought back. You have to take comfort from that in that you have actually done something for someone else,” Jenny reflected.

She acknowledged that there are times when volunteers can be involved in harrowing call-outs.

“The group is very close-knit and we do look after each other in that respect. We have had situations here where we’ve had fatalities and they have been people that we’ve known personally, which makes it a lot harder. But you’ve got the group of lads to come back to and talk things through. It’s not always the minute you come back on shore. It could be a week later. Something could just trigger it off,” she said.