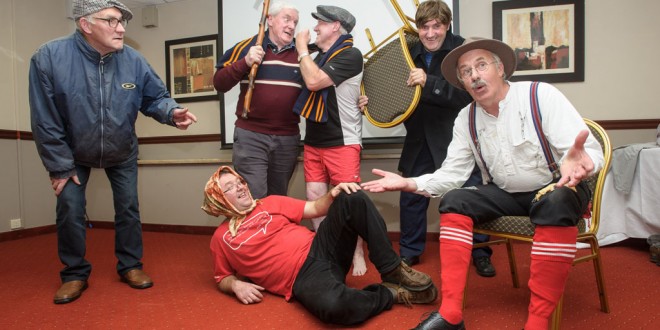 Old scórs to be settled

MEMORIES of cultural contests of years gone by will be rekindled at the West County on November 21.

Settling Old Scórs is being organised by Kilkishen’s John Torpey. He said he wanted to revisit the heyday of Scór in Clare.

“I’m organising a celebratory concert of Scór from the 1970s, ’80s, ’90s and the millennium. Scór was a huge thing, probably one of the greatest social items that the GAA ever came up with,” he said.

In the early days of the competition, there was incredible interest in it, not least in his own part of the county. “Christy Curtin from Miltown Malbay came up with a notion that there should be a social aspect to the GAA. Coming out of that, all of the clubs in the county were contacted, including myself and Robert Frost in O’Callaghan’s Mills. A few of us met in Kilkishen on a Saturday night and we said ‘you sing a song, you do this, you do that’.

“There was one night I got caught badly. I had a young guy called Michael Hogan who played the concert flute, he played the music for Kilkishen but he also danced a set for the Mills! There were a lot of ructions over it,” he added.

In the early 1980s, Scór was embroiled in controversy and the committee organising it in Clare was actually disbanded at one stage.

John says the controversy of the time only showed the passion for it. Several people from that time who were involved in the controversies and who were in dispute, are involved in this event. “The first person I asked to come on board was the person who was chairman at the time when the whole thing was disbanded. Seamus O’Sullivan was the first guy I asked and when I told him the name of the concert, he burst out laughing and said he was on board.”

On the night, there will be a lot of people involved who have a big history in Scór. “We have novelty acts from Sixmilebridge and Shannon Gaels who would have been there before. Cooraclare were last year’s champion and they’re coming in as well. We have three sets, I’m dancing myself in one of them.”

When Scór was at its height, the judging of events was frequently controversial and unfortunate adjudicators could get more abuse than any hurling or football referee. “Adjudication was a massive problem, there was only one adjudicator for every item. When I got elected to Munster Council, my first priority was to get three adjudicators for every item. It didn’t happen for a while but gradually I wore them down,” John noted.

John got his fair share of stick when adjudicating himself, including one night in Tipperary that he still remembers decades later. “I was after doing the Tipp county final in the Premier Hall in Thurles and I got attacked left, right and centre afterwards. There were four teams, Moycarkey/Borris, Newcastle, Clonoulty, Rossmore and Toomevara, they were all in the final. I judged it and I gave it to Newcastle and they actually went on and won the All-Ireland afterwards. One particular team approached me afterwards and they absolutely tore strips off me.

“I said, ‘look it, I’ll talk to one person’. They nominated a guy, Lord have mercy on him he’s dead now since, Seamus Cooney. Seamus said ‘John, what were you thinking of to give it to Newcastle? We were the better team there tonight’. I pulled a notebook out of my pocket, I told him there were two brothers dancing in the set and every time they did the change, they bumped off of each other. I said their line-up was totally out of order and I went through a list of things that I saw as not being good that the other teams hadn’t done. Do you know what he did? He held out his hand, shook hands with me and he said, ‘John Torpey, it’s the first time I got fair adjudication, I never saw a notebook produced before’.”

The funds raised by Settling Old Scórs will go to two deserving causes. “I’m very involved in the Cultural Centre in Kilkishen. We’ve restored a 211-year-old Protestant Church and made it into a cultural centre. We got great help from Clare Local Development Company but we still owe some money on that all the time. Also, I have a little granddaughter who is a regular visitor to Crumlin Children’s Hospital and I thought we would give a percentage of our takings to Crumlin.”

He is looking forward to the event and hopes it might help boost Scór a little. “I had to get permission from Croke Park to use the logo. The case I made was that maybe this would help to bring back the memories to some people and maybe revive Scór a little bit.
“It might give it a shot in the arm, we’re working on a few new things and, hopefully, we’ll have a special guest on the night.”