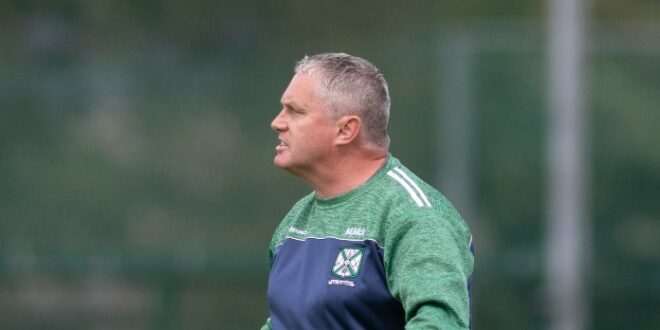 Scariff Ready For Next Step In Clare IHC Final

Last weekend’s win over neighbours Smith O’Brien’s saw Scariff finally break their semi-final hoodoo as they atoned for two last four heartbreaks to book their spot in the decider.

It did not come easy as they went all the way to extra-time while also having goalkeeper Liam Doyle to thank after his dramatic penalty save from Tommy Reddan in the dying embers of the game.

For Scariff boss Mark McKenna, the result was about much more than just local bragging rights as they finally broke through that glass ceiling to reach the showpiece event.

“We have been trying to get here for a long time now and we have been beaten in two semi-finals. This was our third one and it was one that we really targetted to win and get to the final. We have achieved what we set out to do and we are delighted to have done it because it is a great position to be in. Relief was probably the biggest emotion at the final whistle against Smith O’Briens because we only found out afterwards that a lot of the lads were really nervous because that semi-final record was hanging over them a bit. Smith O’Brien’s were out two weeks in a row with both games going to extra-time so it was a serious battle and they deserve great credit too. They are in much the same position as us in trying to win semi-finals. Only one East Clare team could get to the final as it turned out and thankfully that was us but certainly the relief was there” he outlined.

Scariff were one of the teams who lost their senior status in the big cull of 2014 as the top tier of Clare hurling was reduced to 16 teams. McKenna admits their new surroundings of the intermediate grade took time to used to, but the focus was always there on rebuilding for the future.

“Progress was slow in the years that followed and it has taken a lot of hard work from a lot of people to get us to the position we are in now. The underage work was key to that and our amalgamation with Ogonnelloe is starting to bear fruit a bit now. There were times over the past few years where Scariff teams on their own were only competing at C level and that bit of help to play at the higher level will make a huge difference to young lads. It will make him ready for what is coming down the road.People have put a huge amount of time into that over the last few years and we have seen players now starting to come through on to the intermediate team and panel. Some of the lads that won’t be coming through until next year still train with us just to get a feel for it so we have that flow developed from underage and that is starting to pay off. We have the more experienced lads too who were there when we were relegated and they have seen it all and stuck at it, so hopefully they get their reward on Sunday for their great service to Scariff” he said.

Scariff recovered from an opening round loss to neighbours Tulla as they recorded an impressive win over Parteen to get back on track. Their quarter-final tie pitted them against Tulla once more as they exacted revenge with a 1-14 to 1-11 win to see them into the last four. Having waited three weeks for their semi-final clash with Smith O’Brien’s, they now face just a seven day turnaround before taking on a Tubber side who will have had just over two weeks since their last four tie. McKenna is not concerned about their quick reappearance and feels having had such a tough test will mean his side are match sharp for the task ahead.

“The biggest thing for us was to see how lads came out of that game. The fixture was there so we knew it was coming, and while I am sure we would have had the option of asking for the second week, the lads were eager. They were in for recovery on Monday night and everyone was raring to go so we are fine with the week in between and it won’t be a problem. We saw that Smith O’Briens only had a week between their games too and they came out of it razor sharp so they were up to the pace of it really quick so we are hoping we will be ready in the same way once the ball is thrown in on Sunday” he noted.

McKenna says while they know another massive battle awaits, he is also encouraging his players to embrace the occasion surrounding a county final, and is hopeful they can make the most of the opportunity.

“Tubber are one of those teams that you know are going to be at business end of this championship. If you look at the overall stats on them this year, they have put up 13 goals, big scores and big performances. They have quality players and while they haven’t won the final yet, they have that experience of what it is like to be there so we are under no illusions as to what is ahead. We hope can we put ourselves in a position to get over the line. Being there has given a great lift to the town because we are not used to being in county finals. It is 25 years since Clare won the All-Ireland in 1995 but it is also 25 years since we were last in a senior final and we were beaten. We won a Junior B in 2007 or 2008 but adult county finals around here are few and far between. When they come around, we have to enjoy them, embrace it but also keep the lads focused. It has been a difficult year for everyone and like a lot of clubs, we had people who passed on during the year so we would be hoping it will give everyone a great lift and we are really looking forward to it” he said.