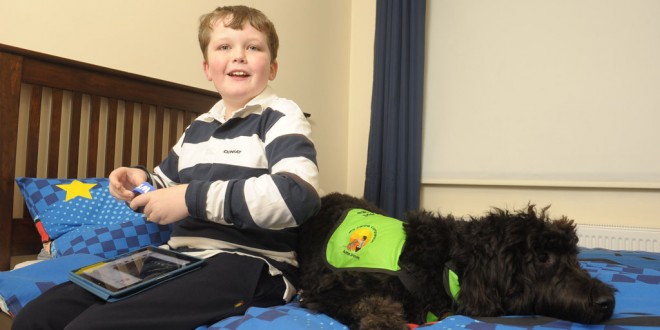 Rocco a ‘godsend’ for Stephen

A North Clare special needs child is the first in the county to receive an assistance dog from a new national charity.

Karen Murtagh, who lives in Ennistymon, has described the arrival of Rocco, a nine-month-old black Labradoodle as a “godsend” for her son, Stephen (10), who has Autism Spectrum Disorder (ASD).

Stephen is one of the lucky children who are benefiting from 48 service dogs provided by My Canine Companion, which trains dogs to assist children and young adults living with ASD. It is the only charity that will give an assistance dog to a child over 10 years of age, as other organisations like to pair an animal with a younger child.

Each dog costs the charity over €10,000 to train and Karen will have to raise half of this figure over the coming years. Businesses in Lahinch, where she was born on Main Street, are already rallying around this worthy cause.

The 19th Bar in Lahinch has organised a golf classic, while Nelly’s Restaurant will host a coffee morning in the near future. Family friend, Pat Conway is also going to raise funds.

Rocco joined the family last April and is hypoallergenic. Karen said she was always interested in getting a dog for Stephen, to help build his social skills and independence, and believes it also benefits her other son, Liam (8), who attends Lahinch National School.

Karen attends monthly classes in Limerick, provided by My Canine Companion, where she learns basic training techniques. All of the dog-owners get great support from one another on their Facebook network. When the dog is between 15 and 18-months-old, he will go back to Cork for his final training.

“I was honoured to get Rocco, as it benefits the family directly and indirectly. We went to Galway one day on the train, with Rocco and Stephen. I would never have attempted to bring Stephen on a train before.

“Stephen calls him ‘my super buddy dog’. Rocco reassures Stephen and, in a stressful situation, he is by his side. The bond is building between the two of them all the time.

“It has been a godsend to get Rocco. It may not suit all kids with autism. If I have to do something with Stephen, Liam can hold Rocco, which keeps him busy as well,” she said.

She said Stephen finds it difficult to take direction but having Rocco makes a big difference. When they now stop at the footpath, Stephen will take the necessary precautions so that Rocco is safe. It deflects things off Stephen by putting the focus on the dog.

“Autism is a hidden disability and is not obvious to everyone. When you arrive with Rocco, people are a lot more understanding and will give Stephen a bit more time, rather than dismissing him as a naughty child.

“Having a dog is like having a wheelchair for autism. People are more aware of Stephen now, when they see Rocco with his green coat. I am hoping to give talks in the local schools as well, to raise more awareness of the dog and Stephen.

“When Rocco is fully trained, the bond between Stephen will be fully blossomed and the dog will be able to guide him when they are out, once he learns all the necessary commands,” she said.