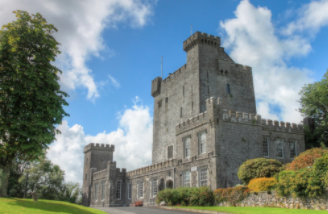 CONCERN in the Quin area over the ongoing closure of two local Shannon Heritage sites has prompted a call for an action committee to ensure their future.

With the advent of the pandemic last March, five sites in Clare and Limerick faced an uncertain future, due to the collapse in overseas visitor numbers. Only Bunratty Castle and Folk Park and King John’s Castle in Limerick have managed to stay open after intense campaigns involving staff, unions and politicians, and a promise of funding from government – the exact details of which are still being ironed out.

Ger O’Halloran of Quin, a businessman and former local election candidate, has pleaded with those responsible not to abandon Knappogue Castle and Craggaunowen, and called for a local action committee to be established.

“To look at Knappogue now, it is locked up and unkempt looking,” he remarked. “The longer it is closed, the more it will cost to get it open again. To maintain the site takes money, even if the gates are closed. That’s an awful shame because Knappogue is an absolutely beautiful place and a wonderful attraction.”

Mr O’Halloran noted that a promised funding package of €2.6 million for Bunratty and King John’s Castles has since been discovered to have a number of issues. “We’re hearing that only €600,000 will be delivered, which is a huge problem in itself,” he said. “But, what also bothers me is the fact that there’s no mention at all of Knappogue and Craggaunowen and if there is, we’re certainly not hearing about it.”

The importance of Knappogue as an employer, particularly for young people and students is something that hasn’t been forgotten in Quin. “Growing up in the area, I know the importance of the castle in providing summer and casual employment for young people,” he said. “When it was open, it employed up to 12 in the kitchen, maybe another 15 to 20 entertainers and four garden staff from Bunratty Castle.”

Twenty-four year-old Shauna Ryan is one of the younger generation who secured work at Knappogue. “I was a kitchen supervisor,” she said, “and absolutely loved it. We were all very disappointed when it closed, especially for all of the young students who would normally rely on it and who are still unemployed in many cases. My parents and older relatives worked here and it’s really a thing that would have gone down the generations. It’s horrible now that it’s closed.”

Ms Ryan noted that a very busy 2019 had seemed to bode well for this year. “We would be catering for 130-150 people a night at a banquet and those were seven nights a week from March to October,” she noted.

The fact that even the grounds of the site remain inaccessible is also a concern.

“People used to go into the grounds for picnics, and there would be steady numbers of visitors coming and going,” she said. “I don’t understand why that’s not even being allowed because social distancing wouldn’t be a problem, given all of the space there is. There’s no reason either that corporate events couldn’t have continued, subject to the restrictions.

“On the heritage side too, it is heart-breaking that the castle is closed. We could have had school groups visiting and learning about the heritage and history. If they can keep Bunratty open, why not Knappogue?”

Mr O’Halloran agreed that there is potential for the two sites, notwithstanding the drop in overseas visitors.

“I really would have to question the marketing of the two sites,” he said. “We have had the summer of the staycation followed by restrictions where we have to stay in the county and neither Knappogue nor Craggaunowen are open. It’s very frustrating. What we really need to know is what is the future plan for Knappogue is. Along with Craggaunowen, it is a diamond in the crown in tourism terms. I would appeal to Shannon Group and others not to abandon it. If it takes a 36-month grant to fund it, that’s what we must look for. The council must be involved in the discussion of its future and the community must be too. A lot of people in the area are willing and able to lend their support.”

The ongoing closure of the two East Clare sites has been criticised by a number of politicians including Deputy Michael McNamara and Councillor Pat Hayes, Cathaoirleach of the Killaloe Municipal District. The impact of the situation has also been flagged by Tourism East Clare as a cause for concern for the long-running plans to attract more tourists to the region.

A spokesperson for Shannon Group said the pandemic had had “a catastrophic impact” on Shannon Heritage visitor attractions. “The closure of all our sites since March has severely impacted our revenue stream,” a statement said. “Our visitor attractions at Shannon Heritage rely heavily on overseas visitors flying into the region, who account for up to 70% of our visitors and revenue.”

In line with level 3 restrictions introduced last week, Bunratty Castle and all indoor spaces in the folk park have closed until October 28. Outdoor areas including the gardens, fairy trail, playground and animal paddocks are still open to the public.

Fiona McGarry joined The Clare Champion as a reporter after a four-year stint as producer of Morning Focus on Clare FM. Prior to that she worked for various radio, print and online titles, including Newstalk, Maximum Media and The Tuam Herald. Fiona’s media career began in her native Mayo when she joined Midwest Radio. She is the maker of a number of radio documentaries, funded by the Broadcasting Authority of Ireland (BAI). She has also availed of the Simon Cumbers Media Fund to report on development issues supported by Irish Aid in Haiti. She won a Justice Media Award for a short radio series on the work of Bedford Row Project, which supports prisoners and families in the Mid-West. Fiona also teaches on the Journalism programmes at NUI Galway. If you have a story and would like to get in touch with Fiona you can email her at fmcgarry@clarechampion.ie or telephone 065 6864146.
Previous Kayaking lessons make a big splash with Ennis students
Next Shannon food bank running out of supplies