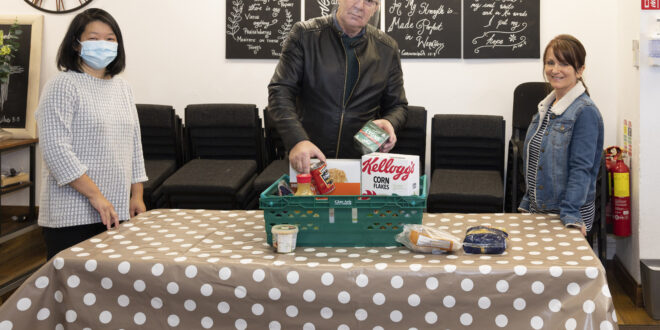 A SHANNON food bank is set to close for most of the last two months of the year, because the demand for what it offers is too great.

Feed Clare has been operating at the Kincora building in the Town Centre for some time, but last Friday was the first time it opened in three weeks, as it had run out of food to distribute. Local woman Karen Cassidy is involved in running Feed Clare and she explained why it hadn’t been open. “We ran out of supplies, we just have a bigger number of people coming in, so obviously we’ve been going through our supplies more quickly, so we had to close until our next delivery was due. We’re with Food Cloud and we’re allotted a certain amount every year, now we’ve applied for more credit from them, but we have to wait and see.”

While a fresh delivery last week allowed it to reopen on Friday, she says there simply won’t be enough for it to continue for much longer than a month. “We got our final delivery of the year and we’ll be lucky if we get through five weeks, I don’t know what we’re going to do. We’re trying to put a bit less in the boxes to try and make it last a bit longer, but we’ll just have to wait and see.”

The increase in numbers coming to the food bank has been rather dramatic. “It is really, I’d say it’s up about 50%. The credits that we have been allotted, that was enough for what we were doing, we had enough every time. But with 50% extra people coming in…”

She is not convinced that the extra demand is down to the economic devastation wreaked by the pandemic. “I’m not sure, when people come in we don’t ask them those details, we just give it out and that’s that. I really think it’s that more people know about it, but obviously there are more people out of work now and there is going to be an increase again, I’d say. We can only give out what we can. I just think more people have heard about it basically.”

As it stands there is no prospect of it being able to offer help every week until the end of the year. “We definitely won’t be open for Christmas anyway, definitely not. I wasn’t here when our stuff arrived, I only came in on Friday morning and I thought, no, we don’t have enough to last us another five weeks.

“Last year at Christmas we were able to give a lot of nice stuff out, treats for families and things like that as well as the groceries. We even had turkeys that we got off of Iceland, we were able to give those out. Just not being able to do it this year is going to be hard.”

Even if there were donations for the public, she says it couldn’t come close to providing the amount that would be required to continue. “It would never cover what you have to have for it. Food Cloud are the only ones that can cover that really.”

As it stands now the foodbank is very busy from the moment it opens on a Friday. “We stay open for about an hour and a half to two hours. People know what time we’re open at and they all come at the beginning. We’re really finished after an hour, but we leave it open an extra bit in case anyone comes late or anything like that.”

Owen Ryan has been a journalist with the Clare Champion since 2007, having previously worked for a number of other regional titles in Limerick, Galway and Cork.
Previous Quin residents say Knappogue and Craggaunowen have been ‘abandoned’
Next Older people report feeling ‘unsafe’ in Clare towns