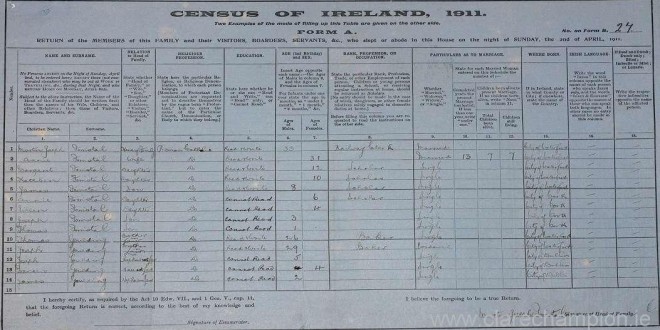 The census form of 1911. Earlier census data can now be viewed online.

MINISTER for Arts, Heritage and the Gaeltacht, Jimmy Deenihan this Monday evening launched the online Pre-1901 Census Survivals and Census Search forms for 1841 and 1851, at the National Archives.

This marks the first online product of a partnership between the National Archives, FindMyPast.ie and FamilySearch.org. The records being launched feature surviving pre-1901 census fragments and census search forms for 1841 and 1851.The census search forms exist because people had to provide proof of age to qualify for the Old Age Pension, introduced in 1909.

In many cases the early census records were the only way to prove that you were over 70, and people made application to the Public Record Office to search in the 1841 and 1851 census records. These search forms, where they exist, serve as substitutes for lost census records.

Minister Deenihan commented, “Over the coming years, many millions of names from the Irish past will be made available online for the first time due to this partnership. I am very happy to support this initiative, conscious of the huge interest in genealogy demonstrated here in Ireland and by our 70 million strong Diaspora. The 1901 and 1911 online censuses continue to be huge successes both at home and abroad, and I’m delighted that the National Archives continues to build on that success by placing more of its genealogical resources online.”