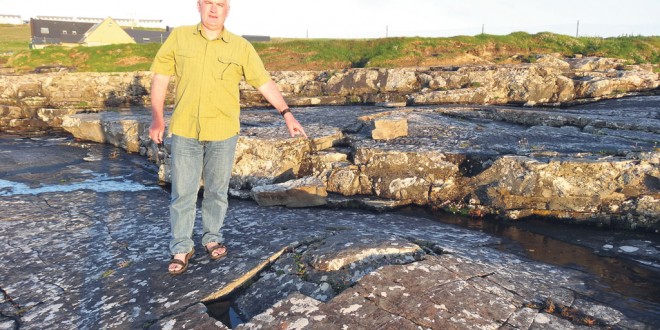 Professor Andy Pulham is pictured at the Pollock Holes.

MANUEL DI Lucia insists the 320 million year old Pollock Holes in Kilkee, along with Duggerna Reef, are akin to the eighth wonder of the world.

The reef is tidal and can only be accessed at low tides or two hours before low tide, which gives in the region of five hours access between tides.
Located at the West End of the West Clare resort town, the Pollock Holes have been examined in detail by geology professor Andy Pulham, who conducts regular field trips to Kilkee and the Loop Head Peninsula. He brings geologists from across the globe to the area, where they examine the wonders of the coastline.

“The reason the reef is called the Pollock Holes is because they are inhabited by small pollock for around six months of the year. They have been known as this name for as far back as 70 years.  I was the first person to swim in the Pollock Holes with a mask and snorkel in 1954,” Manuel states.

“I saw these Pollock swimming in the pools in the crystal clear waters and hence the name. Temperatures can reach 20 degrees in July and August,” he noted.
There are various pools which abound, with species of fish, corals, weeds and birds.

“The main pools range from 1m to 2.5m deep and vary in size from approximately 50m long to 20m wide. There are four of these large pools. These big pools are a favourite swimming spot for children and adults, who swim there daily for eight months of the year. They are also a favourite with young snorkellers for training before taking up scuba diving,” Manuel noted.

“I call this reef the eighth natural wonder of the world as, in all my travels, I have never seen anything like it. That is why I think it is unique in Europe and maybe the world,” he speculated.

Manuel also pointed out that there are many spectacular dive sites off the reef and right out to the black rocks, which are a continuation of the reef itself, and also protects the town from total destruction.

“My favourite dive location is called Myles Creek, which has spectacular underwater scenery and lots of marine life. You start off by jumping into a swim area and swim out till you see a canyon opening up below you, which used to be 20m deep but is now only 15m because the rough seas keep breaking off big chunks of the reef and depositing them in the canyon. This canyon opens out and you can drop off into 30m plus and if the visibility is good, you can see the surface at that depth. All varieties of marine life are to be seen at this dive site,” he explained.

“Doctor’s Rock is also a very good dive location and is very safe for beginners, as it also opens out to a much bigger open pool, with small reefs and canyons leading out into open water. It is sheltered by a reef that exposes at low tide and is also a very popular swimming location when the sea is calm. This dive site also has a variety of marine life and very good visibility in calm conditions. I have seen many spectacular sights in the past 56 years including sharks, whales, orcas, dolphins, porpoises, giant sunfish, bluefin tuna and many species of fish, including trigger fish, which have now taken up residence in the last 30 years. Both dives can be accessed by foot,” Manuel revealed.

“The geology of the Pollock Holes is the record of a late carboniferous river delta that was located off Kilkee 320 million years ago. This was a time when the local climate was hot and humid and copious sediments were pouring off the nearby South Greenland continent,” Andy Pulham explained.

“The rapid supply of muds and sands to the river delta produced unstable conditions and sands deposited at the location of the Pollock Holes accumulated in sheets that became broken and tilted. The pattern of gently dipping platforms and steeply dipping breaks in the sandstones around the Pollock Holes are a direct result of these ancient carboniferous deltaic processes,” he added.

Professor Pulham has also found that burial of the Pollock Holes deltaic sands resulted in heating and cementing, thereby converting the loose sand into very hard and resistant sandstones, which now protect Moore Bay from the Atlantic waves and tides. Geological uplift during a period of widespread volcanic activity along the margins of western Europe and the recent advances and retreats of great ice sheets, have eroded the indurated deltaic sandstones to their approximate position at today’s sea level. The scene was therefore set for the creation of the Pollock Holes after the last glacial melted about 10,000 years ago.

‘Lack of confidence’ in Kilkee coastguard

Kilkee Coast Guard back in sea

A reflection on the early-morning beauty of Kilkee