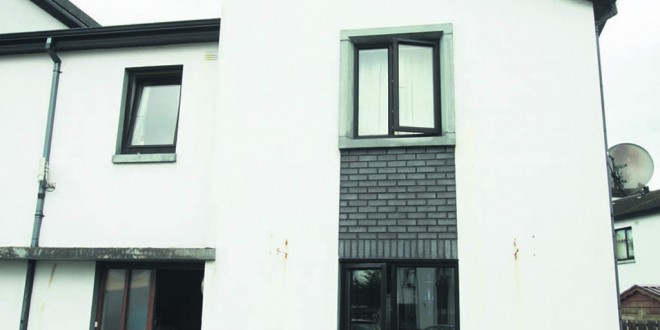 The house at Cúl na Gréine in Shannon where the family live.

Asian family claim they are ‘victims of racism’

AN Asian family living in Shannon’s Cúl na Gréine housing estate claim they are victims of racism, having been verbally abused, assaulted and having had their house egged many times over several years.

They have blasted Clare County Council claiming they have failed to respond to numerous complaints and that the racism has come from the local authority, as well as those behind the direct abuse.

One family member said that assurances they were given when they arrived have not been honoured and that incidents of racism were ignored by the local authority.

“We are here for seven or eight years, since this estate was built. We were the first tenants here and when we signed the lease, we were given an assurance that if there was any anti-social behaviour, the people involved would be evicted. It was in the terms and conditions. We thought it sounded good, we were naïve, we didn’t know that council estates could be like this and we were new here in Ireland. When we moved in, things started happening. My son was assaulted by an adult but nothing was done. Then there were racial slurs from all around the neighbourhood. Our house has been egged so many times and when we complain, nothing has been done.”

She also said rubbish has regularly been thrown into their garden by neighbours, but no action is taken.

Earlier this week a number of eggs were thrown at the house and cars parked outside.

The woman claimed the gardaí have not been of much help. “We call the guards and they say they can’t do anything. Rather than preventing, they wait until something worse happens.”

She said, on one occasion, they were told to remove a notice they had put outside the house, which had a message about the situation. The notice stated: “Sorry for the mess. We are living in a sad, anti-social, racist, xenophobic, aggressive, disgusting and spiteful neighbourhood. The council is not willing to do anything about it”.

She is very angry with their treatment by the local authority and believes they are taking the view that her family will just leave if it doesn’t take action.

“Everyone has their limit and we are very close to our limit now. I think the council are deliberately ignoring us and they just want us to move out, that’s the thing. It’s racism, nothing else, on both parts, the neighbourhood and the council,” she maintained.

“I believe the council doesn’t want us here. We are not uneducated or uncivilised people; we know our rights, we have the right to live peacefully. We keep ourselves to ourselves. When we go out they call us names and they throw eggs on the walls. I don’t feel comfortable when I leave the house and the kids are at home. My mother is disabled and my husband’s health isn’t good. He had a brain tumour removed a year back and he was assaulted. Nothing was done.

“We are a victim of racism, that’s what I can see,” she added.

Clare County Council released a short statement in response to some of the family’s complaints but didn’t make any comment on the accusation of racism.

“Tenants should arrange to visit the housing department, located at Áras Contae an Chláir, New Road, Ennis, if appropriate, where a concern exists. If it is considered that an offence has been committed, tenants may need to also make contact with An Garda Siochána,” the council stated.