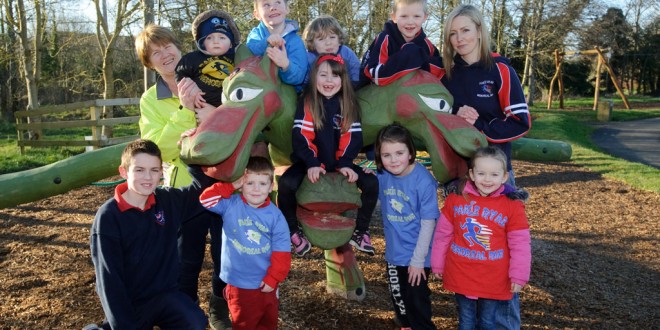 THE Ryan family in Newmarket endured a very difficult emotional rollercoaster in the spring of 2009.

The birth of Abbey Ryan, the first granddaughter in their extended family, on March 3, 2009 brought great joy to everyone.

However, the death of her father, Pakie, (34) in early April, left a cloud hanging over the entire family. The sports fanatic and Newmarket character would have been 40 on Monday, January 26.

During his illness, Pakie received great support from his wife, Frances, relatives, friends and the local community.

His father, Christy recalls Pakie repeatedly said there were people much worse off than him, even in the middle of his cancer battle.

Two or three years after his death, it struck Christy that Pakie had 34 years of happiness, he was never sick and never in hospital.

Frances describes the spring of ’09 as a “battle of emotions”, which was a bit too much for everyone to take in, as there was joy on one hand and impending death on the other.

“After the birth of Abbey, we all knew what was coming next but tried not to think about it,” she said.

A native of Tullamore, Frances grew up and went to school in Shannon and met Pakie during her first year in Limerick Institute of Technology through family, as she went to school with his cousins.

She said Pakie was very proud of Newmarket Celtic and Newmarket GAA. He was very committed to the village and sport.

Referring to the Pakie Ryan run, she said, “It is a very emotional day for me. At the same time it makes me very proud. So much hard work goes into the run before it rolls out successfully, which gives me a great sense of satisfaction.

“People come from Tullamore, America, the North, Dublin and all over the country in 2014. Last year was the most successful and we are hoping this year will be as successful if not better.

“It is inspiring and a testament to Pakie that everyone makes such an effort on the day.”

Last year, Frances took a back seat and stayed at the finish line with Abbey, where she met so many people she knew, including people she wouldn’t expect to run in a race, giving it 100%.

As time goes on does it get easier or harder? “It is hard question to answer. I look at it in two different ways. Every year Pakie is gone, Abbey is another year older. I feel for Abbey more than myself. Kids are very accepting. She knows who he is, where he is and what happened.

“The run is great for Abbey and hopefully it will continue. As Abbey gets older, she will see the legacy he has left behind. It is amazing for her. I put all my feelings into Abbey,” she said.

His brother, Dave said Pakie would greet and talk to people regardless of whether they were the King of England or Joe Soap. Everyone was Bud.”

“He is very fondly remembered in Newmarket and by anyone who crossed his path in a soccer or hurling field”.

Christy said the family was anxious to support community organisations and charitable causes after the tremendous backing they received during Pakie’ s illness.

Pakie’s mother, Christina recalled how Frances was induced before her due date because Pakie desperately wanted to see baby, Abbey. However, it made him worse, as he wasn’t strong enough to hold her, as he got progressively weaker and weaker.

Thanks to the support of an excellent palliative care team from Milford, a special bed was brought out to his home to allow him remain with his family. He was at home on Wednesday, April 2 and went to Milford House the following day where he died.

Seven months after his death, it was suggested a soccer match should be held in him memory. Following a family discussion, it was decided a fun run would be far more inclusive for all sectors of the community.

Christina said before the event they call to the graveyard to tell Pakie he has to look after the weather, which has been good every year.

Christy feels the run helps bring people who may not have met each other for months together for a chat before and after the event.

Dave says that every family has been touched with some form of cancer so the run gives them a chance to meet like minded people, have a chat, share stories and experiences in a show of solidarity.

Newmarket Celtic mentor Paul Tuohy said: “You could never replace Pakie. He was a character who lit up the place”.