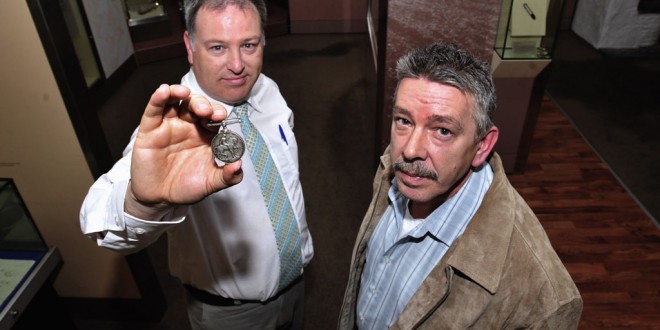 ONE hundred years ago this week, 26-year-old, Private Patrick King, who was born in Kildysart and lived in Turnpike, Ennis, died of “exit wounds” near Bailleul in France.

According to information from the Clare Museum, Private King arrived in France with the 2nd battalion of the South Lancashire Regiment on August 14, 1914, just 10 days after war was declared.
The South Lancashires were part of the 3rd Division that engaged in winter operations between November 23, 1914 and February 6, 1915.

His division was involved in an attack on Wytschaete on December 14, 1914, which had resulted in high casualties. Private King was wounded just a few days before the ending of winter operations and died of his wounds on February 2, 1915, in a hospital close to where he is buried.

In 2008, a successful effort was made to reunite Private King’s World War I Victory Medal with its rightful owners, following a Clarecastle man’s discovery that it belonged to the late soldier.

Alan Barnes, who acquired the medal in 2004, after it was found in mud outside Clarecastle church, matched the serial number on the medal with the number beside Private King’s name, after reading a 2008 edition of The Clare Champion. The Champion had listed the details of every Clare man who died during World War I. He had previously discovered from the 1901 census that there were only three Patrick Kings in Clare at that time.

Subsequently, Frances Morrissey, Ennis, contacted the Clare Museum and confirmed that she was Private King’s granddaughter. He died when Frances’ mother was just three years old.

A total of 7,000 Clare men fought in World War I. The majority of the 640 Clare people killed during the fighting were serving with the American, Canadian or British armies.

The Victory Medal was instituted in 1919 to commemorate the Allies’ defeat of the Central Powers. It was resolved that each of the Allies should issue a Victory Medal to their own nationals. Private King’s medal was one of 5,725,000 British Victory Medals issued.

Private King was born to George and Alice King in Kildysart. He was married to Mary Anne Cassidy, who lived in Turnpike, Ennis.

It is believed that, prior to the outbreak of war, Private King had returned to Turnpike on leave to visit his wife and daughter and two months after his death, his son was born.

This son married and lived for much of his life in Clarecastle.