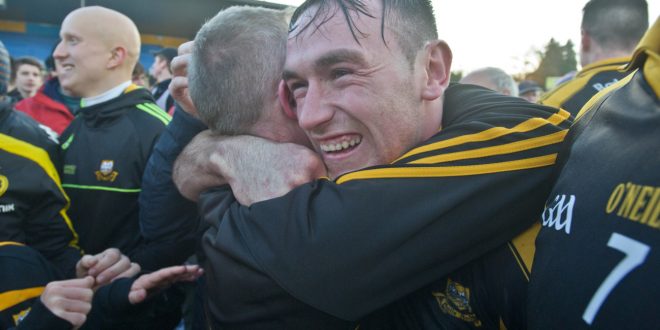 Their fully merited eight point win over Glen Rovers from Cork saw them become the first Clare club since Sixmilebridge in 2000 to bring the Munster club title back to Clare.

rechampion.ie”);There will be no arguments about the merit of their victory as they dominated this contest, played before an official attendance of 4,583, from the early minutes. Yes, Glen Rovers did enjoy a period of dominance in the early minutes of the second half when they hit 2-1 inside seven minutes but three points was as close as they got to the Clare champions who bounced back with some great points before dominating the closing ten minutes when they outscored their opponents, 0-7 to 0-2 to seal a memorable victory.

From an early stage Ballyea took a grip on the game and when the half time whistle sounded they were 1-10 to 0-4 in front and fully deserving of their nine point advantage. Indeed, they would not have been flattered if their lead was greater at this stage such was their dominance throughout the field.

The Clare champions looked as if they had extra players in all sectors as they always seemed to have spare players.

Points were exchanged three times before Ballyea struck a major blow. A Gearoid O’Connell delivery was won by Pearse Lilis and he blasted to the net in the thirteenth minute. After they exchanged points again, the Claremen struck for six unanswered points in the last eleven minutes of the half.

Ballyea had heroes throughout the field on this never to be forgotton day for their club.

There were particularly memorable displays from Gearoid O’Connell at centre back who found time to go forward and contribute 0-3 while Tony Kelly once again showed just why he is rated as one of the top hurlers in the country. Niall Deasy, Jack Browne, Pearse Lillis, Damian Burke, Cathal Doohan, Paul Flanagan and Jack Browne all played key roles in the victory on a day when seven players shared in their impressive final tally