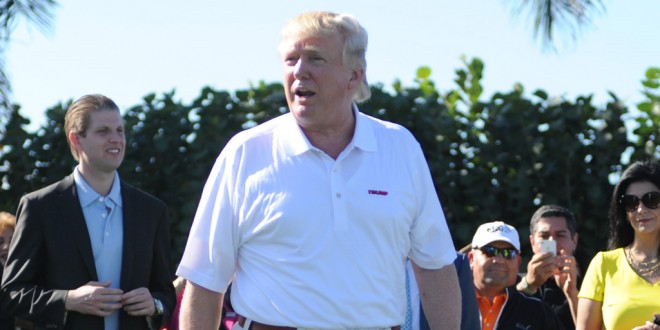 WHILE much focus has been on whether US President Elect Donald Trump will progress with his pre-election promise to build a wall between Mexico and the US, he has until the end of 2016 to respond to Clare County Council’s demand for more information on his proposed Doonbeg wall.

Following extensive flooding, significant repair work had to be carried out at the golf course in Doonbeg, which was re-opened last May.

“The proposed rock berm is the subject of a planning application to Clare County Council by TIGL Enterprises Ireland Ltd. A request for further information has been issued to the applicant, which has until December 31 to reply. In the meantime, Clare County Council is not in a position to make any comment on the proposed development while the application process is ongoing,” the local authority said on Wednesday.

On a visit to Doonbeg last May, to mark the re-opening of the course, Donald Trump’s son, Eric, told The Clare Champion that unless Clare County Council gives the go-ahead to coastal protection works on Doughmore Beach, next to the golf club, the resort is likely to cease operating. Successive winter storms resulted in the golf course having to close for a period in 2014 and the newly-designed course was officially re-opened last Sunday.

“Either it happens and Doonbeg survives (or), if it doesn’t happen, Doonbeg won’t survive because the one amenity that Doonbeg has, which gets everybody out here, will be gone. It’s that simple,” Eric Trump said.

“Here it is in West Clare, in an area that has, quite frankly, been harder hit than any other place in Ireland. [Coastal protection work] makes all the sense in the world. Believe me, it’s not that we are jumping up and down to do it. It’s immensely costly but, at the same time, it’s necessary. Otherwise, this place will not exist,” Mr Trump predicted, adding that, if Clare County Council gives the go-ahead to build the coastal protection works on Doughmore Beach, the Trump organisation will invest further in the resort.

“We’re going to build an unbelievable ballroom, truly world-class. But you can’t do that without the coastal fortification because you’re not going to put in €15m or €20m only to have it washed away.
“It would create construction jobs and permanent jobs. It would be exciting and it would add to the stature of the hotel. That’s our intention,” he stated.

Eric Trump calculates that Trump International has spent more than €50m up to now in Doonbeg, including the acquisition price. “We’re probably north of €50m in terms of the total investment in the property, in terms of buying it and all of the renovations. In terms of the golf course, we’re definitely north of €5m investment-wise and, also, we bought €2m of maintenance equipment. We’ve put a lot into this property,” he concluded.