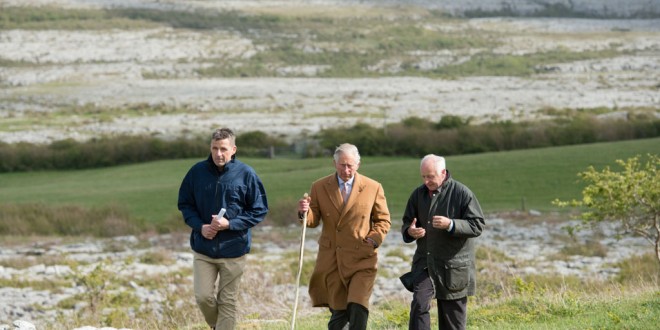 Prince Charles on his visit to the Burren, one of the country's must-visit locations. Photograph by John Kelly

THE latest Irish Hotels Federation (IHF) quarterly barometer showed that hotel and guesthouse owners in Clare and across the country are very optimistic about 2017, after significant growth this year.

Nine in 10 IHF members say they saw increased business in 2016, while 57% grew their workforce and some 89% have plans to reinvest in their properties in 2017.

Also, according to the Central Statistics Office (CSO), the number of overseas visitors grew by 10% to 8.8 million – the highest number on record.

There was an increase of 10% in holiday visitors, while business visitors and those coming to visit friends and relatives were up 12%.

Elaine Fitzgerald Kane, chair of the Shannon branch of the IHF, said there has been a lot to be positive about.

“Irish tourism has seen a record-breaking year in 2016 and there is a lot to celebrate. This is an outstanding achievement and a result of the hard work being carried out by the entire tourism industry, in partnership with the national tourism bodies.”

She added, “It is heartening that our members here in Clare and elsewhere are seeing growth on the ground from US, German and French visitors. There are good reasons to be optimistic about our key North America and European markets in the coming year as well.

“However, there are signs that growth is slowing out of the UK market. While it is too early to say what the effect of Brexit will be, the uncertainty and the fall in the value of sterling will pose challenges.”
Ennis hotelier Paul Madden agreed that things are looking up locally but warned that figures may not be as positive in Clare as in Dublin.

“I would say that we are in a better place than where we were three or four years ago. Having said that, the majority of the national statistics emanate out of Dublin and the greater Dublin region. I wouldn’t say that there has been phenomenal growth here in Ennis. There still are a few issues for people; they don’t have the type of discretionary spend they would like to have.

“Having said that, the darker three or four-year period we had, we seem to have moved on from that. Our third-party contractors are telling us that 2017 looks relatively strong, something similar to 2016. We would be expecting slight growth on 2016 but only marginal, single-digit growth.”

On the positive side, he feels Clare tourism businesses may escape the initial fall-out from Brexit.
“I think it is definitely going to have an effect on Ireland. It’ll affect the overall statistics but I think the majority of the effect will be in and around the Dublin area. The British market has never been hugely strong in the west; it just hasn’t.”

However, he feels there may be a trickle-down effect here, if Brexit begins to damage tourism businesses in the Dublin area.

According to the CSO figures, overseas tourists spent approximately €4.7 billion in Ireland in 2016. This represented a 9% increase, or almost €600 million more compared to what was spent the previous year. Irish air and sea carriers earned a further €1.5 billion from tourists.

Domestic tourism demand also picked up, generating an estimated €1.75bn, with a further €300m earned from visitors from Northern Ireland.