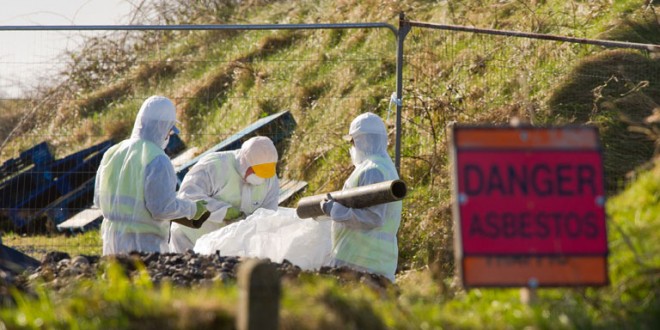 One tender for asbestos disposal project

CLARE County Council’s efforts to progress with learning how to treat and dispose of asbestos at various sites in West Clare have been hit by the receipt of only one tender, following a public procurement process.

Based on information provided by consultancy firm RPS, in August the council sought tenders from companies who would help to establish the extent of the asbestos issue.

Clare County Council confirmed on Wednesday that it has terminated the tender process without appointing a consultant. The council is now reviewing its options, in consultation with RPS.

Last March, Clare County Council commissioned an external, independent investigation into the circumstances surrounding the depositing of asbestos and cement materials at a number of sites throughout West Clare.

At the time, the council said it informed the Health and Safety Authority (HSA) of its intention to remove the hazardous waste material from nine separate locations in the vicinity of Kilrush and Kilkee.

A specialist asbestos consultant was engaged by the council to advise the authority on the removal of the materials.

“The removal of the material will be done in three phases. Phase one, which is being done in accordance with the advice of a specialist asbestos removal consultant, involves the removal of pieces of broken asbestos pipe on the surface at all sites. This work will be done in accordance with method statements notified to the HSA and informed to the EPA. Phase two involves the appointment of a specialist asbestos consultant to develop and carry out soil-testing on the sites, to establish the extent of asbestos material which is buried at the sites. Phase three will involve the removal of any asbestos material at any of the sites which is buried.

“The costs associated with carrying out these works are, as yet, undetermined and will be guided by the outcome of the site investigations to take place in phase two,” the council explained in a statement earlier this year.

Meanwhile, PJ Linnane, who lives near one of the sites in Kilkee, says that he and his family have yet to be screened, despite medical advice suggesting that they should be.

“The council said that it was still being considered but that no decision had been made on whether they would screen the employees that were involved or members of the public like ourselves. We’ve had medical advice that it’s a requirement. Nothing has been done,” Mr Linnane said.