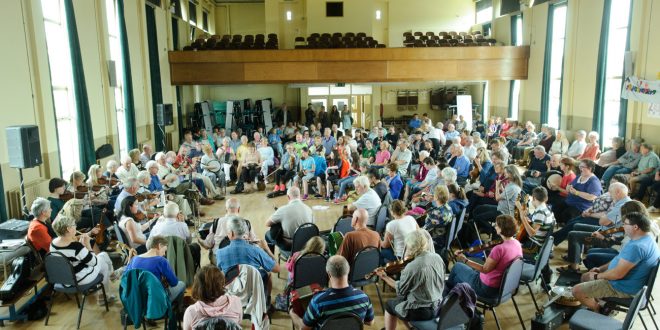 One campside plan for Fleadh 2017

THERE will only be one campsite for Fleadh revellers this year if the plans in the event licence application are approved, local businesses have been told.

While there were a number of campsites last year, this year there is only one campsite, which is in Clarecastle, in the event licence application.

Details of car-parking arrangements and event control were outlined at the meeting by Clare County Council Fleadh co-ordinator Noleen Fitzgerald.

The early part of the festival comprises of Scoil Eigse, a summer school of Irish traditional music, song and dance for children. It is competition time from Thursday to Monday, when competitors will flock from the United States of America, Europe, the United Kingdom and provincial champions from all over Ireland.
Patrons can also look forward to concerts, lectures, Seachtain na Gaeilge and Fleadh TV.

The Gig Rig will be located in Abbey Street again, although its orientation and layout will be slightly different this year. It will back onto Costa Coffee, facing down Abbey Street, as opposed to backing onto the pedestrian bridge.

The main parking provision will be in St Flannan’s, Ennis Mart and Ennis Showgrounds, some of which will only come into operation later in the week, when the crowds start flocking to the town.

A park-and-ride will operate in Clarecastle from early in the week.
It is proposed to operate both the Ennis Showgrounds and St Flannan’s College car parks for the duration of the Fleadh.The Mart parking facility will come into operation from the main days.

Ms Fitzgerald told the meeting that all the traffic, camping and parking arrangements will be assessed by the statutory agencies. While Ennis looked very well during last year’s Fleadh, she said litter and waste management and cleaning up the town also must be considered.

The Clare Volunteer Centre will again provide volunteers and stewarding in relation to crowd control, parking and traffic management.
No casual trading will be allowed this year in Parnell Street car park.

“The intoxicating and busking bylaws will be implemented. Deliveries will be accommodated until 10.30am. Last year we asked businesses to put up window signage about what street they were on and the feedback from people attending the Fleadh found it very positive,” she said.

There is only one campsite, based at Clarecastle, earmarked for the 2017 Fleadh.
Previous Contractor avoids jail in €2.5m fraud case
Next It’s almost tea time, Ted