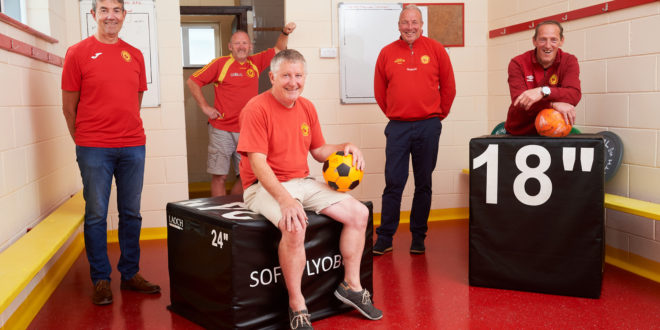 “30 years ago. You’re bringing back a lot of memories now asking about that” is the immediate response and he laughs before gathering himself to issue a “no comment” statement when asked how many of those memories are fit for publication. He says the time since that famous year has flown.

“It doesn’t seem like it was 30 years ago to be honest with you. We were a really close bunch and I think that stood to us throughout the campaign. We only used about 14 players across the run and many of the lads from then are still involved today. In many respects, the time we have on our hands now with Covid-19 has been a blessing in disguise to the club. We moved into Roslevan nearly ten years ago and we were put to the pin of our collar to buy it. All we did at the time was move in and we have been a soccer team playing on a GAA pitch since then and it never really felt right. Since the Covid-19 lockdown happened, we had a number of lads out of work so we started to get some work done around the clubhouse and we got great support. There are four on that team from 1990 who are heavily involved in the development we are doing at the moment namely John Roche, Noel Purtill, Gearoid Mannion and myself. We are all working away in Roslevan to get things sorted and it is great to still have that spirit. We also have Ray Casey doing a few bits and his son Dylan plays on the team at the moment while his wife Ann is the secretary of the academy section of the club. It is quite a small community but 30 years later we still have quite a lot of people involved which is great” he said.

It was a journey without any easy stops along the way, as Avenue came through a tough regional stage of the competition to make the national knockout stages. O’Malley admits while there were some scares along the way, it all added to the sense of the mission they were on.

“You could not really appreciate what this small club from Clare had done. We had some great players and the journey we went on was incredible. In those days, the Clare, Kerry and Desmond League were all in a preliminary group and you had to win that out to get to the last 16 of the national competition. In second round of the regionals, we were two minutes from going out when we played Newcastlewest. We got a goal in the last minute and then won the game in extra-time. We played Tralee Dynamos in the regional final and while they battered us in the first half, we eventually won 2-0. In any cup journey, there will be an element of riding your luck and making your own luck too. We went to Kilkenny after that and then we had the quarter-final at home. We were lucky that the Ennis Rugby Club allowed us the use of their brilliant facilties for that game and we got a brilliant crowd at it. There were great memories all along the way but they were really tough games” he said.

The history of Avenue United from 1983 to 2008 is captured in a book produced by the club where O’Malley recounted his memories of the famous cup run. In his writing, he admitted to thinking that the pressure around such an occasion may have affected the squad with an intense local and national interest in the story of the minnows on the verge of glory. There is still a sense of regret as he looks back on the biggest day in the clubs history.

“If there is one thing that still niggles away, it is that I don’t think we did ourselves justice in the final. The final passed us by I think and we probably let the occasion get to us a little bit. It is understandable but it is a regret. We travelled up with the supporters that morning and we toyed with the idea of going to Dublin the night before and staying away from it all. If we were doing it now, it is certainly the way you would do it but it was unheard of in those days. The other question is whether we would have been able to afford that, and the same routine had worked for us in the semi-final. The final was just a huge occasion and it was a huge celebration. You had this small club from Clare and there was a huge representation from the Avenue. You had the Mounsey’s, the Purtills and the Caseys who were three of the founding families of the club, and all those lads would have played on the very first team the club put out. We had a Youths team but no schoolboys so I suppose you have to put that into context when talking about taking on a Cherry Orchard team who had several Irish junior internationals playing with them. We punched above our weight and when the final whistle went, there was a sense of relief that it was over. We celebrated as if we had won it and maybe that was not the right thing to do, but on the other hand you could not let the occasion go” said the Limerick native.

Preparing for a day of that magnitude as a player is taxing enough, but for O’Malley he had double the effort to put in. Not only was he lining out on the team, but he was also the one lining the team out as manager.

“You know yourself with these things. Sometimes there is no one else to do the job and I was asked to take it on so I did. It was difficult in some respects because there a few lads who had done well at various stages, so having to tell lads they were not playing on the biggest day of their lives was not easy. The players were great and I had a good backroom team with me. Frank McEnery was doing the training and Joe Mounsey was another selector. The Avenue set up at the time was there was a management team of three people and I just happened to be the focal point of it” he outlined.

O’Malley is still heavily involved with Avenue United across a number of levels, including management of the next batch of youngsters in the club. Balancing the responsibility of playing alongside directing matters for the team is something he says he never had a problem with, while the habits still persist today.

“Anyone who knows me will tell you I was barking out orders whether it was on the pitch or the sideline. A problem I might have is that I cannot zip it at times and I am sure a few of the referees in Clare will tell you the same. Barking out orders was always second nature to me and I still probably do it with the schoolboys teams that I manage. Maybe I have mellowed a bit over time but I certainly was not mellow 30 years ago” he laughed.

With the club having its roots in the community, it is no surprise that there is a close bond between the team and their supporters. O’Malley admits there was a real sense of everyone being on the journey together, but the road home did see of them split up.

“There were some mad stories along the way. I can remember being on a train in Dublin looking across at the train on the other platform with some of our lads on it. The thing is they did not realise that they were on the train to Galway and we were on the one for Ennis. They had to get a taxi home from Galway that evening but they still managed to be in Kearney’s before us. There was just that real sense of community about it all. We had a lovely President of the club in Mrs Mullen who was a real lady, and even though there were a few of us who were outsiders, we were all made to feel very welcome. It was a real local street team, that is what is was. It was a great year, it was a great occasion and it was a great journey” he said.