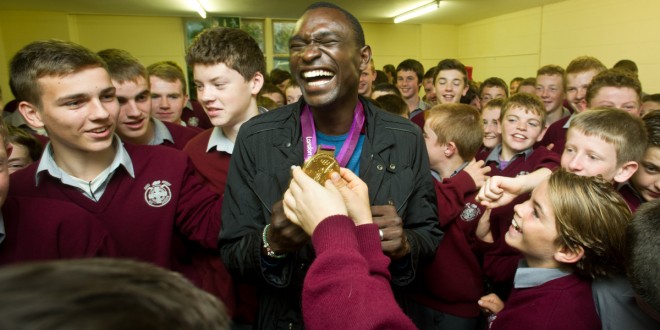 Olympian David Rudisha has his gold medal examined by enthusiastic pupils during his visit to CBS Ennistymon on Tuesday. Photograph by John Kelly

The Kenyan is the fastest man in the world at 800m holding the current Olympic and World Records in the distance and the Olympic gold medal.

In hushed tones, Mr Rudisha spoke to the assembled young people in Ennisymon CBS, Ennistymon Vocational School and Scoil Mhuire Ennistymon as part of a brief tour of the area visiting locals Neilus and Pat O’Doherty.

Mr Rudisha spoke about the impact Br O’Connell had on him.

“From the time I went into his training programme I knew I would win because I was in a good training programme and everything was there for me. I was being beaten at the age of seven. I knew disappointment but I worked hard and I knew that I could improve. Someone told me change what you can and accept what cannot be changed,” he said.

“Don’t just expect smooth sailing, there is also up and down,” Mr Rudisha reminded the young people.

Principal of Ennistymon CBS, Anne Tuohy described the visit to the school’s 180 pupils as an “inspiration”.

“It is a once-off. It is a total inspiration for staff and students. It is absolutely fantastic. Getting a photograph and getting to touch the medal, it is inspiration and his words are ‘you can if you think you can and you will have falls but keep going’. I think that is a great motto for all young people and it is one I would like to continue,” she said.

Clare can win with their hearts says Rudisha