Home » News » Clare can win with their hearts says Rudisha 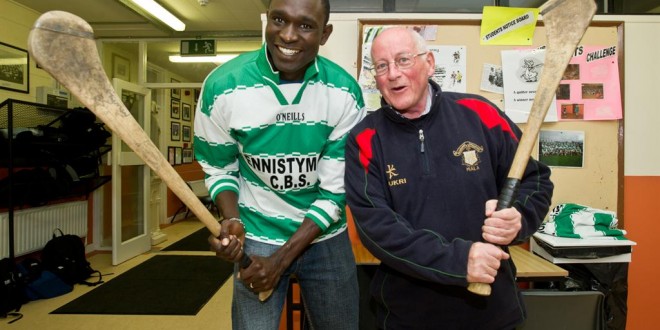 Clare can win with their hearts says Rudisha

The 23-year-old shifts his weight from his left foot to his right and back again, bending his knees as he does so. As he gently sways, his face is nothing but steely focus.

The 6ft 2in figure strides to the white line.

His eyes are set with determination.

Leaning forward, he stretches his left leg in front of him and he takes his position.

There is a delayed response from the crowd as the runners launch their attempts to earn Olympic medals.

Rudisha takes the lead. Kaki is on his shoulder. Aman follows. It looks fast. It is fast. The tall man in Kenyan livery completes the first 400m in 49.28 seconds.
The battle for second place begins as Rudisha pulls away. Aman is in second, Kaki third as Rudisha passes the 600m mark at 1.14.30. Now it is Amos that comes forward into second, Kitum third. Rudisha is comfortably leading as he comes into the final straight. He crosses the finish line breaking the world record in a time of 1.40.91 and the sound of the crowd vibrates around the stadium.

That was the scene that played out to millions across the world when David Rudisha of Kenya took gold in the men’s 800m final on August 9 last year.
Rudisha is the best middle distance runner in the world. He holds the Olympic gold, the Olympic record and the world record in the discipline. He doesn’t know much about hurling and doesn’t pretend to, but he knows about pressure and he knows about performing on the big day.

“Some people know how to handle pressure in different ways. You know the best thing normally is to work hard and after you have worked hard you just go there, be confident and just perform. Don’t be nervous because you need to show that confidence and don’t be afraid of anything because you know you already believe in yourself, just go there and perform.”

This is his advice for the Clare senior hurlers. He also believes the right balance of passion and focus is vital in carrying them to All-Ireland glory. “What I always say is when you have trained and you are at that point, the important thing is to stay focussed, do what you are supposed to do there. Be determined and be focussed because if you are ready for it, then there is nothing that can stop you if you have that determination,” he comments.

As well as knowing the cool weight of an Olympic gold medal against his chest, Rudisha also recognises the feeling of victory slipping through his fingers. The runner suffered badly when he missed the Olympics due to injury in 2008 and when he failed to make the final of the 2009 World Championships due to a strategic error.

“Nobody was just born a winner and you know when you start doing anything you don’t expect to start winning. Sometimes we lost a few races when we started out and had a lot of disappointment and ups and downs, but the most important thing is to ask yourself what went wrong, and how am I going to improve for the next time? How am I going to get better results? That is what I used to ask myself several times even through the disappointment that went before, like when I missed the Olympics in 2008 and in 2009 I missed the final in the World Championships in Bali. I sat down to think and we looked at how we could change the programme and what would work best to see that this would not happen again. Because, at the end of the day, you will only be able to influence your own performance, you can’t influence somebody else and that is the most important thing,” he says.

Rudisha loves performing to a crowd and believes that if you put the work in, you will be rewarded. When he was standing at the start line in London last year, he didn’t think about the fact that just one lane away was Ethiopia’s Mohammad Aman, who had beaten him at the end of the 2011 season. That day had passed.

At the start of a new race, or before a match, is not the time to focus on past defeats or chances missed, instead the Kenyan believes athletes should approach their sport in a positive way.

“It is a great feeling to be in such a big championship, on a stage in front of around 80,000 people. It was a great feeling for me. That was my first Olympic Games but the most important thing is that I had a lot of confidence coming into the Olympics. I did a big amount of work and preparation towards the Olympics so I didn’t have anything to worry about. I just had to go there and do my best and deliver a good result,” he recalls.

Munster glory for Clare U-21 hurlers